Pinball has come to a fork in the road, presenting alternative paths to the future. One path is for artists and aesthetes, another for technologist, scientists and engineers.

It’s about form and function. Another way of putting it is to use a computing analogy: some machines will be “Apple”, and some will be “Microsoft.” 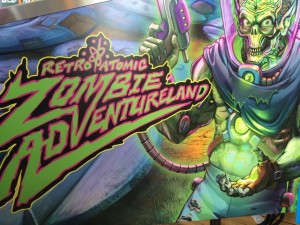 The “Apple” side is best personified by John Popadiuk, who unveiled the cabinet for his Retro Atomic Zombie Adventureland at Pinball Expo last week.

The fact that he unveiled his cabinet – not a playfield, or anything remotely playable – says a lot. Like a new iPhone or iPad, the cabinet was a thing of beauty. We saw form, but nothing remotely functioning.

Visually though, it was stunning. It’s a big cabinet – or at least it’s a tall one. That means there’s more room for Popadiuk’s gorgeous artwork – which is different on each side. “This is real art,” he points out, “not clip art or logos. It’s artwork that has been designed for the pinball machine.” 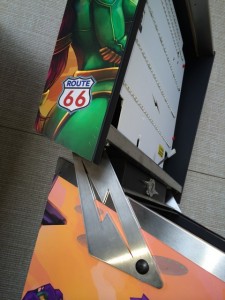 No detail is missing: the Zidware logo on the cabinet’s hinges

The cabinet itself is also a work of art. “We have got steel in the backbox at the bottom of the backglass and for the lock trim, and it looks great,” he says. “The backbox is also on a pedestal with an illuminated “Z” (the logo of Popadiuk’s Zidware company).” Even the hinges have the “Z” logo cut in to them.

Popadiuk is also planning to have a circular recess cut into the side of the cabinet, which will be illuminated with neon.

He plans to offer a high degree of customisation to customers so that they can buy something unique. “I am designing 1000 games for 1000 different people,” he says. “Customers might ask me to draw their dog on the playfield, or engrave their initials (into the cabinet.)”

With the massive attention to detail that Popadiuk plans to offer, this begs one obvious question. Does this leave any room for customers to mod his machines themselves? After all, there’s a huge appetite for mods, but if everything has been designed and embellished to the highest degree, what’s left to do? 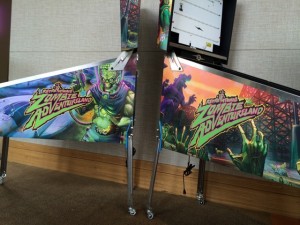 The new cabinets are visually stunning

Pavlov Pinball put the question to Popadiuk, and his answer was revealing. Just as Apple discourages customers from jailbreaking their devices and making modifications themselves, Popadiuk expects that his customers will be less hands-on than other pinball machine owners. “We leave (mods) for you to think up , and then you can ask us to do them,” he says. “If you want your wife’s face in the machine, we can do it for you.”

So does he see his company as the “Apple” of pinball? “Definitely!” he replies.

But if Popadiuk’s the Steve Jobs of pinball, who’s the Bill Gates? A leading candidate would be Gerry Stellenberg of Multimorphic. Stellenberg’s Lexy Lightspeed – Galaxy Girl was also on show at Expo. As an engineer rather than an artist, Stellenberg accepted that the Gates moniker might be appropriate when Pavlov Pinball buttonholed him in the vendor hall. 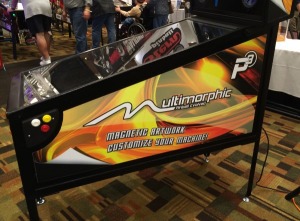 Function is everything. Art? Make you own if you want

For Multimorphic, it’s technology that’s the most important thing in pinball, and the new machine certainly has it in bucketloads. The bottom two thirds of the playfield is one massive touchscreen displaying a virtual playfield (with physical flippers and slingshots on top), while only the top third has physical playfield furniture. This is pinball, Jim, but not as we know it.

As for art – well that’s just a minor consideration: something to decorate the sides of the cabinet and nothing more. For Stellenberg – as for Bill Gates – what’s important is what’s going on inside the box, and why should anyone pay much attention to the appearance. “Art shouldn’t be the reason to buy or not to buy a pinball machine. You don’t have to make artwork part of the buying decision,” he says. 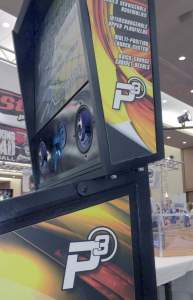 How does Multimorphic achieve this? Its side art is actually printed onto flexible magnetic panels (similar to signage you can fix to your car), so if you don’t like it, you can just peel it off and replace it with something else. “You can get together with someone who is an artist and make new artwork for your machine if you like. If it is good then maybe we will license it from you and offer it with the game to customers,” says Stellenberg.

He adds that companies can put their logos on the sides of machines if they want to to promote their brands – something you get the feeling would be anathema to Popadiuk. As for detailing on the hinges and other similar frippery? Forget it.

What about the other vendors out there? JJP, Stern, Dutch Pinball, Heighway Pinball and so on? Where do they stand in this art-technology divide?

The truth is that it’s more of a spectrum than a divide, with some pinball makers emphasising form over function, and some the reverse. Heighway’s Full Throttle is arguably more about function, while Dutch Pinball’s The Big Lebowski and Whizzbang Pinball’s Whoa! Nellie are more about form. JJP? Somewhere in between, perhaps. Stern? Difficult to say.

The good news is that, ultimately, art and technology in pinball are only as important as you want them to be. Like a machine because it looks nice? Great. Because it’s got a big-ass LCD screen on the playfield? That’s great too.

What’s really great is that thanks to all these vendors you’re more likely than ever to find a machine that matches your position on the art/technology spectrum.

Apple, Microsoft, or somewhere in between.