Head over to Coogee Bay in Sydney, Australia, and you’ll find a pinball club that’s going from strength to strength. Its membership is growing by the week, and unlike in many pinball hangouts the clientele are relatively young. Some are even female. 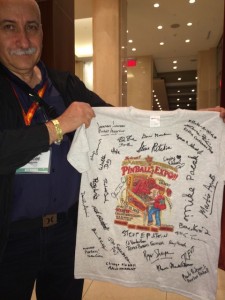 Pinball HQ is the brainchild of Norbert Snicer, a veteran of the Australian coin-op scene who worked for many years at a large Williams, Bally and Gottlieb distributor as electronic workshop and technical manager. Snicer has run pinball maintenance training programs, and is also the author of Pinball Machines: How They Work & Troubleshooting.

But back in 2010 his eyesight started to fade and he could no longer make a living carrying out board repairs, so he looked around for something else to do.  Something pinball related was the only way to go.

“Of all the things I have done in my life, pinball always made me happy and I liked everything about it,” reasons Snicer.

So that year he started to promote pinball in earnest, and restarted his intensive two day pinball troubleshooting courses. (In the ’80s and ’90s these were mainly for operators, but now they are attended by private pinball owners.)

He also started the Australian Pinball League, and tried to get operators on board. But there was a problem.

“With the exception of a very few I just couldn’t get them excited,” says Snicer. “They didn’t make any money from pinball so they couldn’t be bothered. I wanted them to be involved because it is not possible to promote pinball just with machines that are in private houses. Collectors keep pinball alive, which is fantastic, but you need to have pinball in public places – so you need operators.”

Coggee Diggers
A quick digression for readers who have never been Down Under: The Returned and Services League (RSL) is a support organisation for men and women who have served or are serving in the Australian military, and there are hundreds of RSL clubs throughout the country. Some of these clubs are struggling to survive as older members pass away, and many are actively seeking a new generation of younger members. 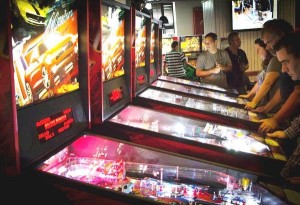 That’s a lot of Mustangs at Pinball HQ

Now over in Coogee Bay there’s an RSL club called Coogee Diggers, but it’s a couple of hundred yards from the beach and it gets very little passing traffic, says Snicer. So he formulated a plan.

His vision was to turn part of it into a pinball venue that would attract younger people as well as the fifty somethings that may have played pinball in the past, and to build it into a club with plenty of members, with a good social side, with food and drink. Basically somewhere that people would want to come to have fun and play pinball.

But none of the operators he contacted to see if they would help get this vision off the ground were interested.

“I realised the only way to do it was to get involved myself, so I did. I put in thirteen machines,” says Snicer. “I supplied the new Stern Pinballs and an old friend of mine Rod Brooks
supplied the older Bally/Williams ones.”

New Sterns all round
And he didn’t stint on the machines either. Pop in to Pinball HQ, and you’ll find the very latest Stern titles. “You have to have new machines in a place like this,” explains Snicer. “I heard an operator recently saying that he operates old machines from the 90s, and that they do as well or better than new machines. This is just not true.” 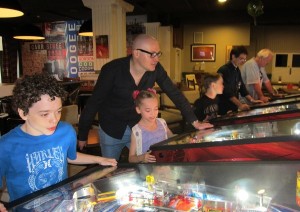 Snicer continues: “It is true that some people are nostalgic about games and they like stuff like The Addams Family, which is a great game. But it is all about getting new people, and young people just don’t know about The Addams Family. They need titles that they do know about like The Walking Dead.

“New machines are also more reliable, they attract new people, they generate a better income and they have a great resale value. Every week, the newer machines outperform the older ones. They cost more but they make more money.”

But he adds that some older machines, particularly Fun House, do continue to be popular with the clubs members.

Another quick digression: The Australian Pinball League, which Snicer heads, holds its Grand Final at Supernova – Australia’s equivalent to Comic-con. The choice is quite deliberate: to gain interest from younger people. “I want youngsters to tell their friends that they saw pinball at Supernova – a cool place – not that they saw pinball at their granddad’s place,” says Snicer.

Emma Chissit?
A question that operators always have to face is how much to charge for a game? Should they charge just a quarter or two per game, like in the 1990s, or should prices be raised in the same way that cinema tickets have gone up over the last twenty years?

“In Australia we have a $2 coin, and our price is a standard $2, or three plays for $5,” says Snicer. (Two Australian dollars is about US$1.76 or £1.10) “All our machines are priced like this – even older machines. The reason for it is to keep them in great condition. They play well and we provide variety.

“It is not good for operators to compete on price. That drives operator profits down and they fail to make money, and that’s a bad strategy,” he adds. 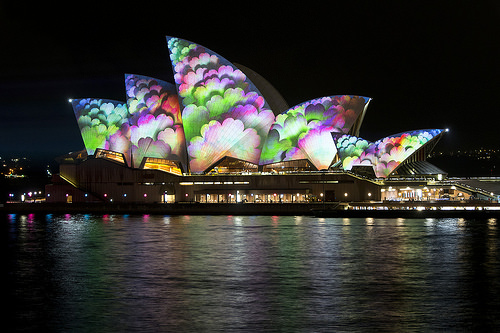 Sydney has good venues for opera and pinball

50:50 is a mugs game
And what about the income split between the operator and the site’s owner? In general, a 50:50 is a very bad idea, Snicer believes. A split of 70:30 in favour of the operator was a much more realistic prospect even back in the 1990s.

“If you want the operator to bring in the latest games and generate money then this is how it has to be,” he says.

Location location location…
Finding the right site is clearly key, and Snicer believes that the busiest places are not the best prospects. The problem with these sites is that three people can occupy the place of one pinball machine, and they’ll probably spend more in three hours than a machine will earn in three months.

A far better prospect is a site – like the Coogee Diggers RSL – that has fewer customers. “I told them that I would make the investment (in machines) and bring the people. They provide the space, I provide the machines and the people.”

The deal then is that the RSL reaps the benefits of more people coming in and making food and drink purchases, while Snicer gets the income from the pinball machines to recoup his investment and, eventually, make some profits.

He says that he has not yet broken even since buying the machines in February, but he is not worried. “I now have a place to try out what works and what doesn’t. Then I can provide a model for other operators: I want to prove that you can provide lots of machines and make people happy, and that you can make money.” 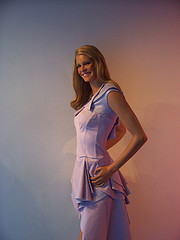 Aussie Elle McPherson would be welcome at Pinball HQ

One area that Snicer is still working on is figuring out how to attract more women to the club because – like in many pinball environments – women are in a considerable minority at Pinball HQ. It’s important to bring that more in to balance, he believes, in order to attract the younger players that pinball needs to survive and thrive.

“If you are male and in your fifties you may like to switch off in a male only environment. But when you are in your twenties or maybe thirties you want to go to places where there are girls. People want to go to a club where they can meet people of the opposite sex, and I want to cater for this.

“No-one wants pinball to be a sausage party,” he concludes.