Silver Castle exploded onto the Dutch (and world) pinball scene a few months ago with the announcement that the company is to make a real version of the virtual pinball machine Timeshock! 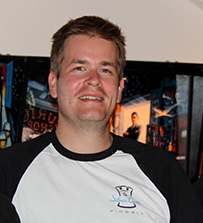 Jurgen van Dulst fell in love with Timeshock! the moment he first played it

Turning Timeshock! from a PC game into an actual physical pinball machine has been a long-held dream for Jurgen van Dulst, the boss and financier of Silver Castle, pretty much since he first played it.

“The day it came out I went in to the city on the bus to buy it and it was love at first sight,” says van Dulst. “And if you look back you’ll find a post I made on rec.games.pinball in about 2003 asking why no-one is actually building the game.”

Since then van Dulst has made his fortune in business, built up a collection of twenty classic Bally Williams and newer pinball machines, and got himself into a position where he can try to fulfil his dream by starting Silver Castle and building Timeshock! The aim is to make pinball machines that mirrors the virtual table he played in his youth as closely as possible. 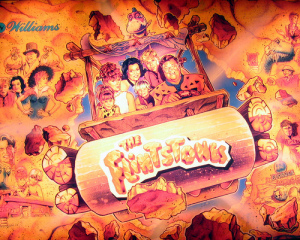 So is van Dulst not a teensy weensy bit concerned that once the real physical Timeshock! is complete, it just won’t be the same experience as the onscreen version? Isn’t it always a letdown when you meet your heroes in real life?

Van Dulst is not perturbed in the slightest.

He reckons the physical game will feel the same as the original. “Timeshock! has been praised for its physics as it gets it so close to the real thing: the ball acts like a real ball,” he says. “But you always have to close the little gap between the physical and the virtual, so we are still adjusting, widening, getting the flow right,” he adds.

Adrian Barritt, Timeshock!’s original designer, made the game as realistic as he could, so there have been remarkably few serious problems in building the game so far. Van Dulst mentions a few – like a ball diverter in the back right hand corner of the game that physically couldn’t be where it appears in the virtual table.

Most of the challenges have revolved around cramming real components on the underside of the playfield – something that Barritt didn’t have to worry about when he made the PC game.

Why did he make the games so realistic? “It was a labour of love,” Barritt tells Pavlov Pinball. “I wanted to make simulations, not fantasy games. Basically I wanted to make a simulated Williams pinball table in the virtual world because I always thought Williams was the best. That meant doing everything, including the operator’s menu, ball searches, everything.” 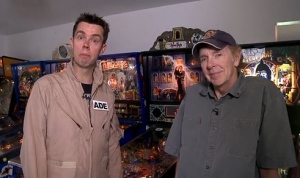 How hard can it be? Adrian Barritt with (real) pinball designer Pat Lawlor

Barritt says that he has spoken to other pinball manufacturers in the past about building the game, but declines to name any names. He adds that when Silver Castle approached him about building it he had some reservations at first.

“There were questions marks because they had not built anything before. But their proposal was well thought out and members of their team had worked on other games so I agreed.”

Despite the success of his Timeshock! design, Barritt says he hasn’t considered approaching any other manufacturers and offering to design a real table. “That would be nice though,” he says. “I definitely have more designs in me yet!”

One potential show stopper that the project has faced is building a machine that is simply too expensive. Real designers can remove features and otherwise mess about with their designs to ensure that their games can be built at a reasonable cost. But because Silver Castle is building a replica of a game that already exists, there’s no option to cut costs by removing features. So how does van Dulst know that making Timeshock! at a sensible price is even possible?

“I made a budget before we started, and up to now we haven’t been too far off,” he says. “We won’t be the cheapest machine, but I have a feeling that we will stay within the bounds of what a pinball machine can cost.” 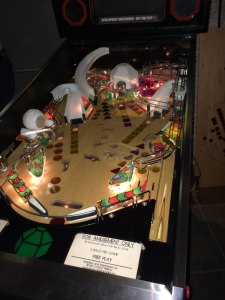 He says that although he won’t contemplate removing features, there are areas where the game can be modified to control costs. For example, in the game the ball goes behind the backboard, and travels on a wireform before returning to the playfield. “We have to think about authenticity, but wireforms are expensive so we could replace it with something made of plastic.”

In the event, the decision was made to get rid of the wireform and use something cheaper, since it can’t be seen by the player. “When you think about it, it’s a no brainer,” says van Dulst. Which is one of Pavlov Pinball’s favourite quotes of all time.

But producing the game to a reasonable budget has certainly been much harder than he expected, he says, because the costs have been more than he anticipated. “If we had known when we started what we know now, I am not sure that we would have started,” he says. Still, he gives every impression that he is very pleased that he has started this particular pinball escapade.

An interesting trend that’s going on the pinball world at the moment is that classic Bally Williams titles’ prices are dropping – or certainly not rising at the pace they have been over the past few years. One explanation for this is the fact that there are so many newer games with exciting new technology available to tempt those looking to make a pinball purchase. So does it make sense to build a game like Timeshock! today? After all, it’s modelled on a bog standard mid-1990s DMD era game, and technology has move on a long way since then. Is there a risk that Timeshock! has missed the boat?

Another interesting question is this: who’s going to buy the machine once it’s complete? The computer game sold hundreds of thousands of copies, but gamers don’t necessarily have the cash or the space, let alone the desire, to own a real pinball table. And real pinball enthusiasts may be more interested in something genuinely new like The Big Lebowski or The Hobbit than something from the 1990s (although admittedly there has been no shortage of people signing up to buy the remake of Medieval Madness.)

“Timeshock! is not a remake, it’s something that’s not been done before,” says van Dulst. “Ultimately pinball is about the game, the flow, the feeling of accomplishment which Timeshock! provides in abundance, so it will appeal to everyone.

“But it will hold a special appeal for a certain demographic: people who loved the game and wanted it to be real. And now it is – or at least it soon will be.”