Pinball machines were commonplace in arcades and snackbars when Koen Heltzel was a child in Roermond, The Netherlands, in the early 1990s, but by the time he had grown up and left home they had all but disappeared. Then one day in 2007 he spotted an old machine called Starship Troopers on an online auction site and bought it for his new apartment. “And that,” he says, “is when the pinball bug well and truly bit me.”

This is an extract of a feature by Pavlov originally  published in BBC Future.

There’s an adage in pinball circles that single machines get lonely: it is only a matter of time before the first is joined by many more. And sure enough, the 27-year-old web designer’s first pinball machine was soon joined by one, two, three and eventually four more. Today, these large, heavy, noisy, but strangely beautiful contraptions dominate Heltzel’s small flat.

Heltzel is not alone. Pinball machines, or “pins”, are increasingly falling into the private hands of a vibrant community of fanatics – known as pinheads. Some people are interested in pin history, some see them as an art form, some like restoring them, most people simply enjoy getting together with other pinheads and playing them. Then, there are those like Hetzel, who want to hack the hardware and software to give the game a decisive spring-loaded kick into the 21st Century. 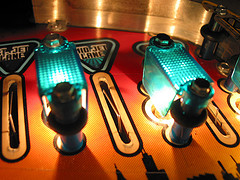 These hackers, or modders as they are known, find it impossible to resist any opportunity to customise pinball machines to make them look cooler and play better – from adding new artwork or a few extra parts to building an entire souped-up machine from scratch. “In the past I used to mod cars,” explains serial modder Stan Simpson. “Now I mod pinball machines. I think it’s just that some generations are more hands on than younger people today, who maybe just sit down with an X-Box and don’t fiddle.”

In terms of its technology, pinball machines from the 1950s through to the mid-1970s were entirely electro-mechanical, but the late 1970s saw the first electronic machines controlled by microprocessors running rudimentary software. By the early 1990s the computing power in pinball machines – though still limited – was sufficient to power dot matrix displays that displayed scores and other simple graphics, and this was enough to drive the last boom in the popularity of pinball. In 1993, over 120,000 machines were produced to satisfy demand.

But compared to slot machines and digital video games, pinball machines are simply too expensive to make: a typical machine has about 3,500 parts including 1,200 screws, 115 light bulbs, 72 switches and over half a mile of wiring. And assembling one requires more labour man-hours than a car. By the end of the century the great pinball makers like Gottleib, Bally and Williams had all left the business. Today, only one manufacturer, Stern Pinball, regularly produces a limited number of new machines every year out of its factory in the Chicago suburbs.

George Gomez, a veteran pinball designer for Bally and Williams, and who is now responsible for game development at Stern, admits that little has changed in the last 20 years in terms of the technology built in to machines. “The games we make are still stuck back in the ’90s,” he says. Pinball machines, on the face of it, are trapped in a kind of technology time warp.

Which is where pinball modders come in: finding ever-more complex ways to supercharge their machines, and meeting at pinball expos and creating websites to show off their work, share tips and tricks, and offer their services.

For instance, Chris Williams, an aircraft service engineer from North Wales, but known to fellow pinheads as Poibug, replaced the rather innocent storybook-style artwork from an old Gottleib Genie machine made in 1979 with a theme inspired by the American punk band The Ramones – with the sound to match. “I thought about integrating a set of Ramones sounds with the machine, so that when the ball rolled over a given switch it would play a sound,” says Williams. But instead he opted to fit a 50W guitar amp to the inside of the machine, which blasts out a selection of Ramones songs stored on a memory stick. He says his latest plan is to fit a 6-inch (15-centimetre) video screen into the back of the machine so that it can play Ramones videos as well.

Not available in the UK