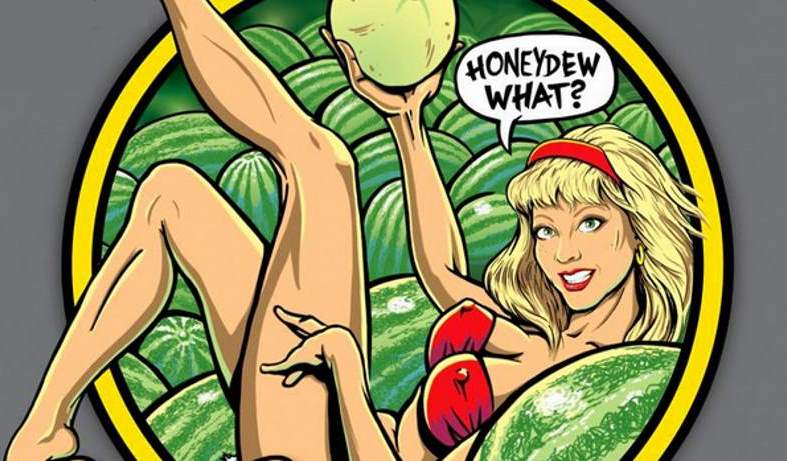 Melony Mellon’s the star of Whoa Nellie! Big Juicy Melons, and it’s not hard to see why. She’s young, blonde, leggy and sexy: a typical backbox babe in other words.

But unlike the characters in most games these days, Melony’s not a character licensed from a film or TV show. That means there’s no actress who’s played her and given her a voice. 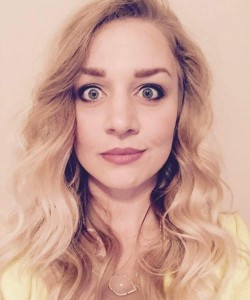 And that put designers Greg Freres and Dennis Nordman in a bit of a quandary when it came to producing the game for Stern to make. Who was the right person to do the Melony voice callouts?

What they had in mind was for the character was something like Elly May Clampett, the honest to goodness southern belle from The Beverly Hillbillies. But where to find a voice actor to play her?

Now as it happened, Jerry Thompson (of Stern Mustang fame) was tasked with doing the sound package for the game, and he worked down in Louisiana in the same building as local radio personality Jessica Rowe.

She’s done commercial voice overs and sports commentaries and has a perfect voice for radio.


But when it comes down to the old adage “she’s got a face for radio,” nothing could be further from the truth. Turns out Jessica’s almost a dead ringer for the “real” Melony. She’s young and blonde – like Melony – and although she’s originally from San Diego there’s no doubt she’s now a southern belle. She’s also one of the loveliest, sweetest people Pavlov Pinball has ever interviewed. 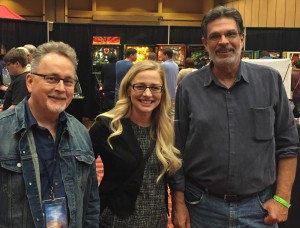 But more importantly, when Thompson suggested her to Freres and Nordman, they reckoned she sounded just like what they were after.

In fact Freres described her as the perfect voice over. “She just fits the character you see on the backglass,” he said in Pinball Magazine.

What did Jessica aim for? “I’ve been told I have a chameleon voice, and I did the ‘sweet country girl who doesn’t realise she’s sexy’ and they liked it,” she told Pavlov Pinball.

In fact if it wasn’t for Freres and Nordman, Melony may have been a bit more raunchy than she turned out in the end, Jessica says.

“When I was recording some of the one liners, they told me it was too sexy and got me to do them again,” she says. 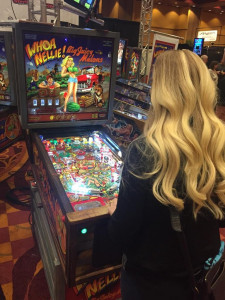 “They wanted to keep it innocent and fun, but when you are playing a girl with long legs and talking about melons on a farm it’s hard to keep it PG!”

Now it’s impossible to talk about Whoa! Nellie without mentioning the criticism it received from some quarters about the appropriateness, or otherwise, of having young, blonde, leggy and sexy girls on a pinball backglass in 2016. Allusions to big juicy melons were like red rags to a bull.

Did that bother the real life Melony? “I saw the criticism (of the game) that it was sexist, but I just thought the concept was a lot of fun,” she says. “I like to judge things by how my mother reacts to them and she loved the game and thought it was hilarious!”

And that, without a doubt, is the attitude that Melony Mellon would take.

The voice-over work took about a month to complete, with Jessica using her radio station’s studio to do the recordings and Freres and Nordman listening in from Chicago and directing proceedings down the wire to get her voice just right.

When I hear my voice coming out of a game that people are interacting with – it’s mind-blowing!

(In fact she didn’t get to meet Freres and Nordman until after the game was released, at the Texas Pinball Festival.)

“It was nerve-wracking doing it with the designers themselves, but they are great,” she says. “The hardest part was trying to keep in character and maintain the accent while saying something ordinary like “Five points!” 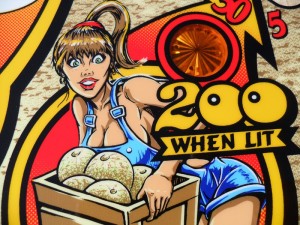 At least the concept wasn’t entirely alien to her though: Jessica admits to having always been fascinated by pinball machines and gravitating to them in arcades.

Her favourites are The Addams Family and The Simpsons, but she won’t be giving Bowen a run for his money any time soon. The ball saver is her best friend, she admits. “I love getting a free ball when you lose one really quickly,” she giggles.

(Nerdy note: there is no ball saver in The Addams Family: Pat Lawlor can’t abide them.)

So overall, how would she sum up her experience playing a fantasy pinball character like Melony Mellon?

“When I recorded my voice for the game I didn’t know how it would come out, but when I hear my voice coming out of a game that people are interacting with – it’s mind-blowing!” she says.

“It’s a lot more weird hearing your voice coming out of a pinball machine than a radio!”