Somewhere in Africa there’s a man who turns EMs into solid state machines.

There’s no dark magic involved, just some weird science picked up from the South African weapons industry and re-applied to old EMs as a last resort to get them going again. 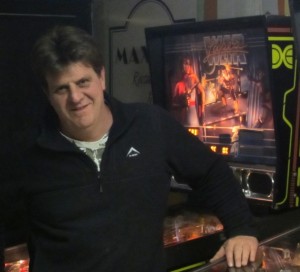 The practitioner of this weird science is Frik Barnard, an electronics engineer, software developer and control systems freak who worked on missile seeker heads for the military back in the day. He’s also a very nice guy, and he now devotes his time to servicing, fixing and restoring pinball machines of all shapes and ages though his company, Escapism Pinball.

And, in some cases, converting EMs to SSs. “People are reluctant to convert their EMs – especially people who know their stuff – because EMs have a special feel to them,” he says. “But sometimes they can’t be fixed, so I chuck in a load of electronics and program them so that the game rules are the same as the originals.”

He makes it sound disarmingly simple, but the job involves rewiring the playfield, ripping out all the EM gear and installing his home designed mainboard that reads switches and carries out housekeeping, powered by an 8-bit processor that Barnard programs in C. Then there’s a lamp board, a solenoid board, boards to power each of the new 7 segment displays he installs, and more boards beside. 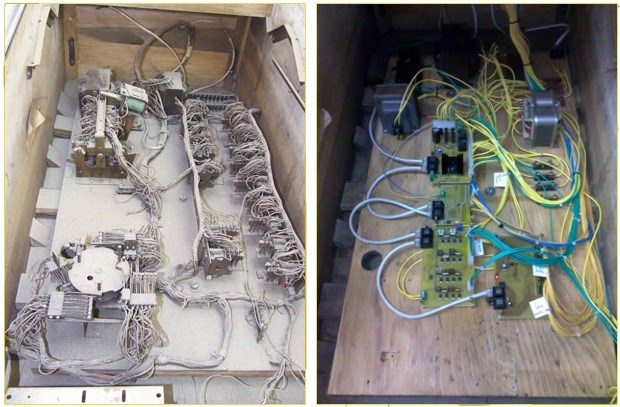 Before: EM. After: Solid State

Of course the fact that the score reels are removed and replaced by 7-segment displays is a dead giveaway that a machine has been converted, but Barnard has a plan up his sleeve. “60% of issues that you get with EM machines are score reel related, but I am designing a board that will interface with the score reels which will be able to make the score reels click over on a converted machine,” he says.

There’s also the fact that SSs don’t sound like EMs, but he’s working on that too. There’s no doubt this guy is smart: if he was working on an anti-gravity belt you’d bet he would succeed.

The rules on the originals are often very simple, so I like to add in a few rules of my own when I program them.

Other than the sounds and the displays, do the machines work in an identical fashion to the originals? Here Barnard has a cheeky confession to make. “The rules on the originals are often very simple, so I like to add in a few rules of my own when I program them. For example, I may have a Special target which is only lit for a few seconds. You can’t really do that on an EM, but it’s peanuts to do in software.”

And one other thing that’s different: once all the electromechanical guts are ripped out and replaced with electronics, the conversions are much lighter than the original machines.

Now Barnard also has another trick up his sleeve – one that stems from his experience with restoration. “I got a Gottlieb Fast Draw and the cabinet was falling apart. The playfield also needed attention because it had been repainted,” he explains, before dropping a bombshell. “It also appeared to have caught fire at some point.”

Most people may well have given up with it here, but Barnard had other ideas. “This was too far gone to restore, so I decided to make a completely new playfield. I couldn’t find any maple ply so I used Russian birchwood.”

A bit of computer graphics work and the use of a CNC machine, plus the careful application of a sticker (decal) on the birchwood and he had himself a new playfield.

Barnard’s playfields are made from birchwood that comes from Russia. This lady does too.

You can see where this is going, can’t you. Why bother restoring a rubbish game when you can create a replica of a really good one? And there are plenty of rubbish ones around – very old ones imported to South Africa forty or fifty years ago, or ones in poor condition that have made their way to South Africa over the years via Zimbabwe and Mozambique.

“Eight Ball and Spirit of 76 are both nice games with rules that work, and a layout that works,” Barnard says.  “So if I find an old machine I strip it out, make a playfield which is like Spirit or Eight Ball, use different graphics to stop the lawyers from knocking my door down, and tweak the rule set to make it a little different.”

And hey presto, a new solid state game is born.

It may raise a few eyebrows, but there’s no doubt that Barnard has a deep and genuine love of silver ball. He sums up like this: “(Pinball is)  a gift to the world from the guys at Genco, Gottlieb, Bally, Williams, Data East and Stern, and I’ll do my part to preserve and contribute what I can.”