Question: What do salad bar sneeze guards, tanning beds and pinball playfields have in common?

Answer: All of these things can be cleaned and polished with Novus, the very disgusting-looking brown goo that comes in three formulations and which is known and loved by pinball machine owners the world over. 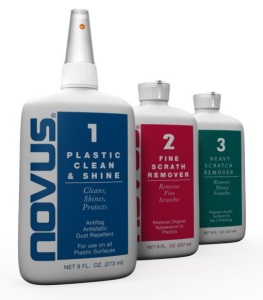 But how did Novus come to be such an integral part of pinball culture? It’s an unlikely achievement for a humble plastic polish made by half a dozen employees in a factory in the charming but unfashionable state of Minnesota.

Novus’s origins have nothing to do with pinball or any type of coin-op entertainment: bizarrely, it has its roots in car windscreen repair. That’s right: car windscreen repair. Back in 1973 the company invented a repair process that involved filling rock holes with resin, and to smooth the resin once the repair was complete it developed a polish.

One thing led to another, and the polish worked so well that the company saw an opportunity. It launched its Novus 1 and Novus 2 polish the same year. It then set about flogging it to… well to owners of salad bar sneeze bars and tanning beds, as well as boat owners, emergency services (to polish their flashing woo-woo lamps, apparently) and anyone else who had acrylic or plastic surfaces that where somewhat the worse for wear. 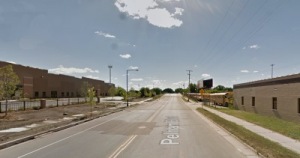 So how on earth did this plastic product wriggle its way into pinball consciousness? The answer to this question, like the answers to so many pinball-related questions, can be traced back to Chicago.

“Back in 1991 Williams began testing polishing products and found that ours didn’t damage Mylar,” says Dean Trocke, sales manager at Novus. “So the Williams technical people started recommending the Novus polishes to their customers, and pinball-related sales just snowballed from there. There was a few pinball sales before 1991, but after that there was a big boom.” 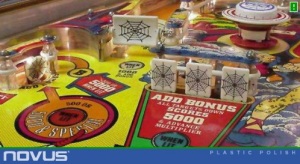 Today about 5% of the company’s sales goes to the pinball industry – about 5,000 bottles of Novus 2 a year, slightly more of Novus 1, and slightly less of Novus 3, a more abrasive product which was launched in the early ’90s.

(It’s not hard to understand why Novus 3 is used relatively sparingly by pinball machine owners: using it is the equivalent of rubbing a playfield with relatively coarse 600 grit sandpaper, compared to the far more gentle 1200 grit sandpaper effect of Novus 2.)

A large part of the attraction of pinball is nostalgia, and in this respect Novus fits the bill perfectly. Its simple blue, red and green packaging looks like something straight out of the 1970s, and the company’s priceless and charmingly dated product “video” – actually just a series of photos – is accompanied by a soundtrack that sounds like it comes from the twilight zone.

Here’s a snippet: “Novus plastic polish removes scratches and protects the finish of various types of acrylic surfaces,  such as display cases found in museums or retail stores. After using Novus plastic polish the precious contents of these cases can be seen… WITHOUT OBSTRUCTION.”

And here’s another, specific to pinball (although you get the impression that the narrator has never seen a pinball machine, much less cleaned one): “The pinball playing fields (?) have a protective Mylar strip (?)  that our Number 2 polish cleans and protects without damage. Other products on the market … CAN’T MAKE THAT CLAIM!”

Trocke says that the company has considered updating the packaging or producing something specially designed to appeal to the pinball market, but reasons that the product is so well known by pinball enthusiasts that there’s no need to change it.

One final Novus fact for you: it’s also popular for polishing bowling balls. If only there was a pinball machine that had a bowling theme… Oh wait. 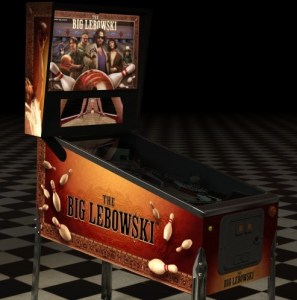 Pavlov’s verdict: We love you Novus. Don’t change, ever …