Pavlov Pinball spoke to Jack Guarnieri of Jersey Jack Pinball and Barry Driessen of Dutch Pinball in part one of this special feature about colour pinball displays and the future of pinball. Continuing the theme in this exclusive interview, we asked  pinball industry veteran and current Stern Pinball VP of game development George Gomez for his views on the subject.

Pavlov Pinball: Does Stern Pinball have any plans to introduce full colour screens on its pinball machines in the near future?

George Gomez: Yes, we are working on something but we won’t release it until we are happy with it. I also believe that the game is really under the glass, with a ball and flippers.

PP: And does Stern Pinball have any plans to introduce screens in other areas of future machines – perhaps on the playfield?

GG: We will be using numerous video formats in various ways in future machines. 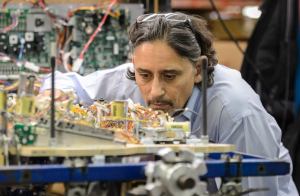 Monster Bash, Revenge From Mars and Lord Of The Rings are some of George Gomez’s accomplishments

PP: Do you think that a colour screen, and the use of colour to convey information to players – for example about modes running (rather having that information expressly displayed) – would make this communication between screen and player easier?

GG: Yes, colour can be a powerful tool when used by design. Note the way that we’ve handled multi-colour LEDs on inserts and for mood lighting to convey mode changes.

PP: User interfaces, font choices, colour schemes and so on are hugely important for computer and mobile device manufacturers to ensure their products are easy to use. Is this an area that Stern studies in depth – again in terms of how best to convey information to players?

GG: Yes, of course. I was Executive Producer at Midway Games for nine  years of my career working on console games (X-Box, PS2, X360, PS3) and I began my career in coin op video games so I’m hyper sensitive to how information is displayed and how a player interacts with and perceives a user interface.

PP: What are your thoughts on the effectiveness of displaying text (and digits) versus symbols or graphics when it comes to conveying information to players when they have a limited time to take their eyes off the playfield?

GG: Icons can be powerful but only once a player recognizes them. They obviously pose a learning challenge when you approach a game cold. A number system and language driven font presentation is pretty powerful until a player gets to know a game. 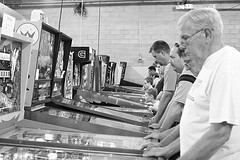 Sound can be used to convey information as well as colour, but only if you can hear it

PP: Is the use of sound a good way of conveying information about what is happening in a game as an alternative to visual information? Or is its usefulness limited by the fact that pinball is often played in noisy public environments (not to mention that the sound may be turned way down.)

GG: Yeah, you nailed it. Sound is powerful but it’s not uncommon for a location to turn it down. This is particularly true in Europe where machines are typically found in bars, cafes, and other street locations. We put so much work into these things and yet that challenge remains. Nowadays the workaround is a headphone jack for the player because everyone is walking around with ear buds.

PP: Do you think that, in general, people are better at getting complex information from screens today than they were 15 years ago – perhaps because people are more used to using smartphones, tablets, laptops and so on?

GG: Absolutely. We have video interfaces in every aspect of life; in our pockets, in our cars, at work, at home. Pretty much everywhere. By the way, part of pinball’s attraction to a new generation is that it is a physically visceral experience. Our randomness is generated by gravity, not a random number generator. 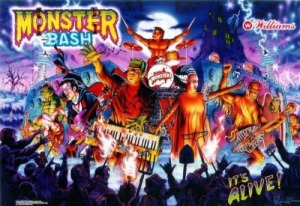 Monster Bash is a highly sought after title

GG: Insert lights and audio cues are tools but a target or device state change is also very powerful.

Designers typically create pauses by holding the ball or purposely slowing it down. If you slow a ball down and display an image where the player is focused you will be able to convey a lot of information quickly. Again think of shooting a ramp in P2K (Pinball 2000) and the score instantly hovers over the shot to convey that you scored it. In RFM (Revenge from Mars) an example is the Space Shuttles firing on the alien saucer situated over the ramp entrances.

PP: Is it possible to communicate the information that a player of a fast, complex modern game requires effectively using a single colour
(4 or 16 shade) screen?

GG: “Fast” implies that the attention needs to be on the ball, which of course it does. So even when a display is beneath the glass the reality is that a player references it when the ball is in control – so in my opinion “fast” doesn’t play into the colour issue.

While colour can be a powerful information icon, again the notion that the display is informing the player as he worries about the ball is misleading. People on the periphery benefit more from the display than the player does while he is playing.

The exception is what I did in Pinball 2000 where the actual video image was your target. The P2K scenario is one of the few truly ball interactive displays in the game. I also like what Gerry Stellenberg (of Multimorphic)  has done in terms of making his display interactive.

All of the other display efforts are primarily informative. A player references them for status and score and if he happens to catch an animation because the ball is held either by design or on the flipper, then it is also entertaining. 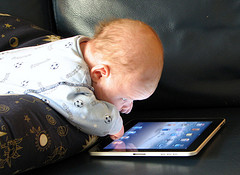 PP: How important is the display as a medium for entertaining non-players or attracting players, and how is that reflected in what a game displays? Are most of the things displayed on the screen intended for the player, or is there a significant proportion of what’s displayed that is intended for spectators rather than the player?

GG: While most things are intended to convey achievement, inform and entertain, the reality is that the player sees a fraction of it when he’s playing. The spectators get the better video show.

Yes, of course. The issue is not in hanging a monitor on a cabinet and driving it – if we felt that that’s all it took we would have done it years ago. There are several issues, the most obvious is the ability to create compelling content within a reasonable development schedule.

In addition there are challenges with licensor content- not every licensor will allow the use of their material. The latter is much easier to bridge when it’s obvious that the content is not the same as their content.

Remember that when I did P2K, I had access to a full video game team to create all that beautiful video content (modelers, lighters, texture guys, animators, cinematics guys, motion capture guys, and substantially more software talent to manipulate and install the content.)

So with the increased development effort comes a substantial cost which at some time translates into the product. To me the current efforts appear to be very limited in content and they contain a lot of stuff that’s in the public domain.

This interview is the second part of a two part Pavlov Pinball special feature on colour. The first part is Why colour is vital to pinball’s future

2 Comments on George Gomez interview: his take on colour displays and more