The first point of call for Pavlov Pinball was the Stern distributor’s stand, where there were two spanking new Wrestlemania machines, still factory fresh. And what with these being the first Wrestlemanias to hit Europe, it’s no surprise that by the time Pavlov Pinball rocked up they were already being playtested and scrutinised by two of Europe’s leading pinball editors: Jonathan Joosten from Pinball Magazine, and Martin Ayub from Pinball News. 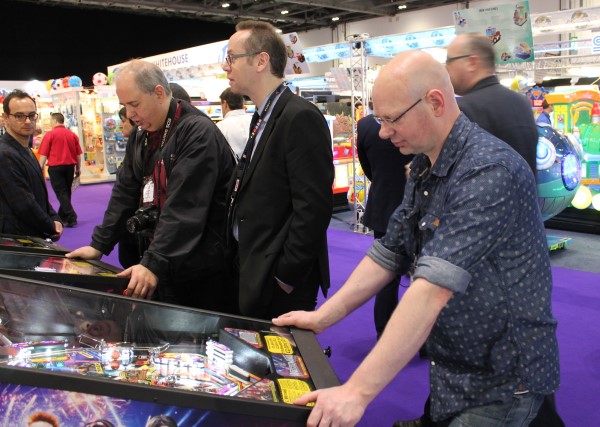 One of these two machines had a cutout backbox, displaying the new LED backbox lighting: 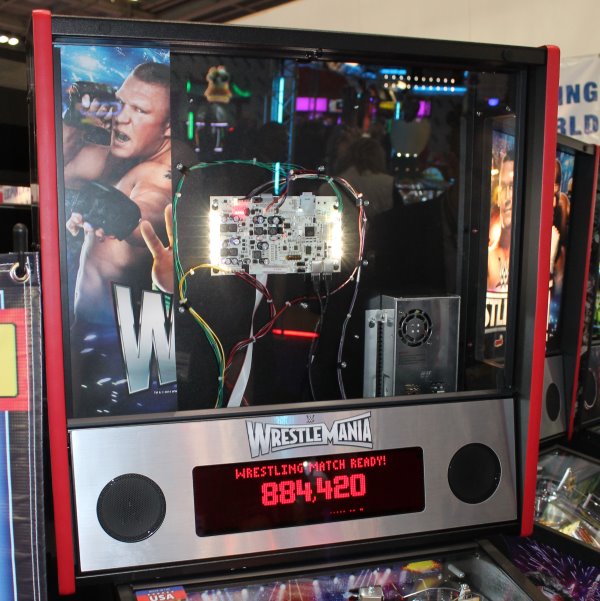 Surely that’s not Wayne Rooney on the left of the LED lighting?

What’s the game like? Very hard to say really as the code is still in an early stage. First impressions are that the playfield has the same feel as Mustang with bright primary colours. 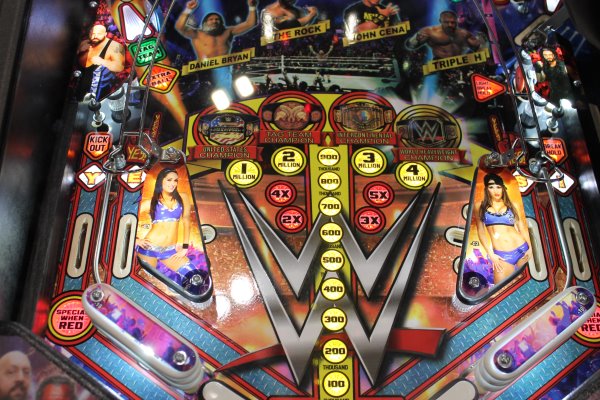 But without being able to hear the callouts, enjoy the DMD graphics (there are hardly any in the code yet)  or fully take in the rules it’s probably unfair to pass any sort of judgement. 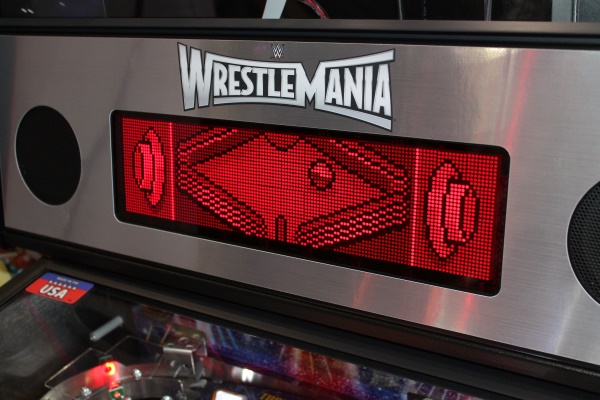 There’s not too many graphics yet, but the metal speaker panel looks grouse

A few thoughts though:

1. The ring in the upper playfield looks very cool, but will it get old very quickly? It’s a worry, and it depends on what gameplay possibilities the code presents when it’s more mature. 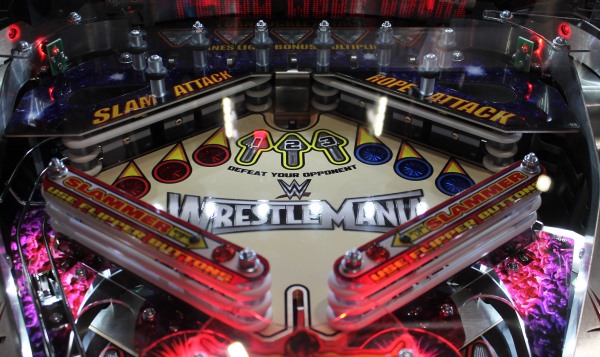 2. The Walking Dead – which was also on display – seems much more interesting, with more to do, for the player who walks up and doesn’t have a clue about the rules. Put another way, shooting the flashing lights seems far more satisfying on The Walking Dead. 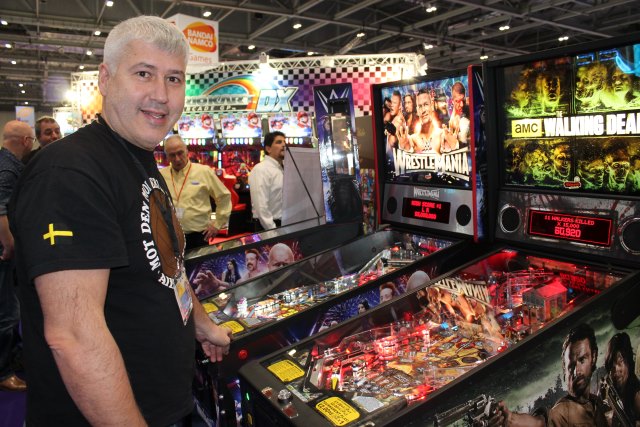 Over at Pinball Heaven’s stand, Jersey Jack was holding court with The Hobbit. 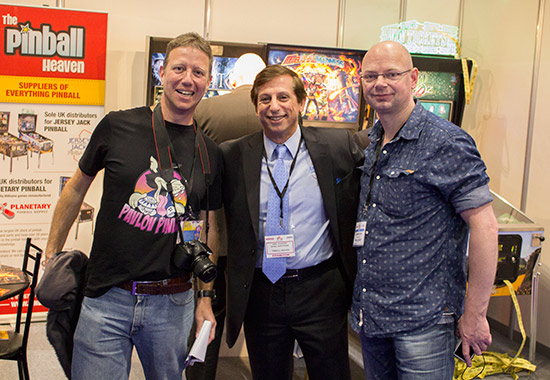 The Hobbit  that Pavlov Pinball saw at the Dutch Pinball Open in November had the old playfield design, but at the time Jack was showing off a new design on his phone. Two months on and the new playfield was on show in all its splendour: 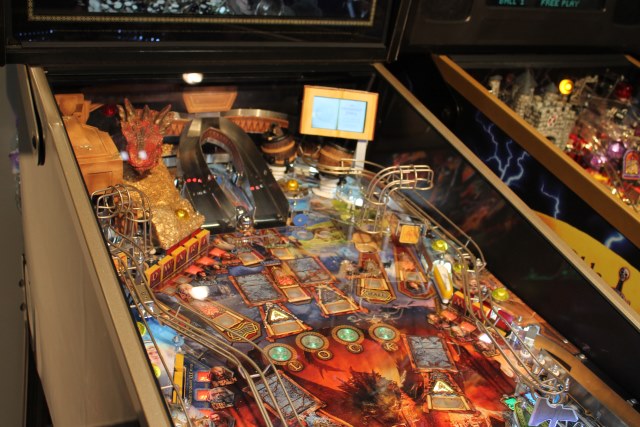 The Champion Pub style rotating Smaug toy now has gone, and the new one definitely looks less Basil Brush-ish than it did before: 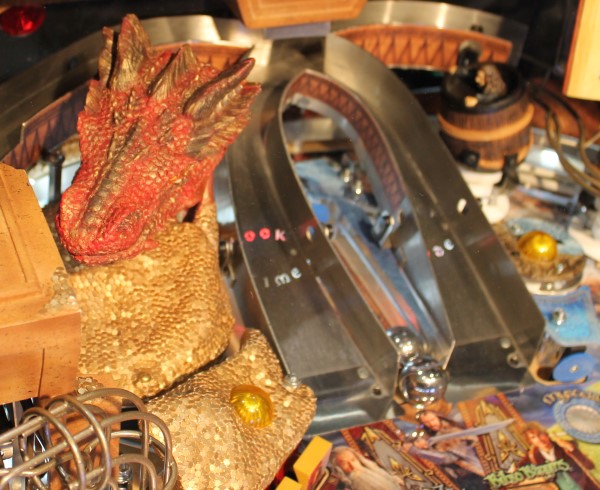 Separated on the stand by a brand new Medieval Madness was something a little bit different and never before seen: A Wizard of Oz pindemption game. 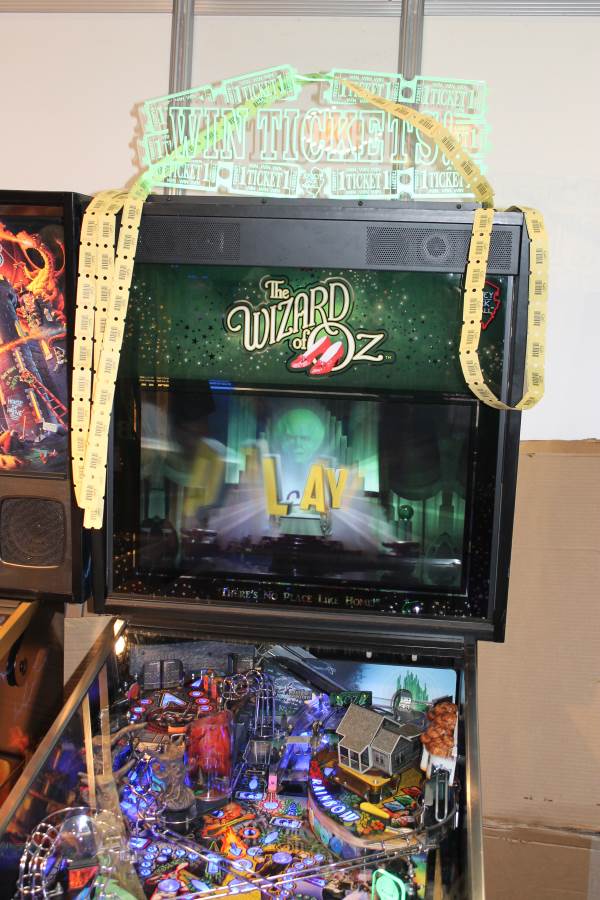 I’m going to have to give you a ticket, Sir

Pindemption is JJP’s trademarked name for a pinball redemption game, and essentially it’s a Wizard of Oz pinball machine with modified software that has compressed rules (for which read easier to achieve goals.) It also has a modified harness to support a ticket dispenser, and a change of dongle on the computer inside the machine.

Once a WoZ pinball has been turned into a WoZ pindemption machine – and it can be converted back to a regular pinball game at any time by making a selection in the software – the game becomes time limited. Basically you get 45 seconds or one minute of play – or whatever length of time the operator sets – and instead of points you earn tickets – which you trade in for cuddly Minion toys or whatever else the host arcade is offering. 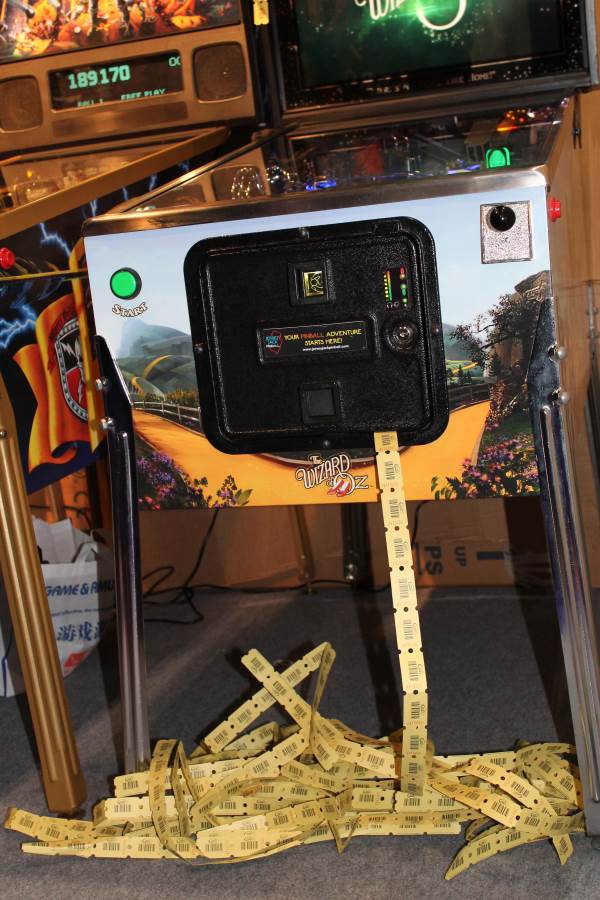 Jack reckons pindemption games are a licence to print money

Jack predicts big things for this pindemption setup when it becomes available in the next couple of months because where WoZ pinball earns $300 per week, the pindemption game has been earning in excess of $1000 a week, he says. For operators that means the machine can pay for itself in a matter of a couple of months, with the option of turning it in to a regular pinball machine at any time. He doesn’t rule out making a cut down, feature limited (and presumably cut price)  base machine to run the pindemption software in the future either.

Is he not worried that this type of bastardised pinball machine could harm the pinball renaissance? Not a bit of it. “This is teaching young people to play pinball!” Jack says. He adds that it also solves the problem for operators and pinball debutantes of people who get too good at pinball games. “The problem was always that you got stuck behind the guy who was on the machine for ten minutes,” Jack explains.

Finally on to Heighway Pinball’s stand, where there were three Full Throttles on show in advance of the official launch party at the Pipeline in London on January the 16th. As well as an early cabinet (below) there were two new-style cabinets with a new playfield rail system. 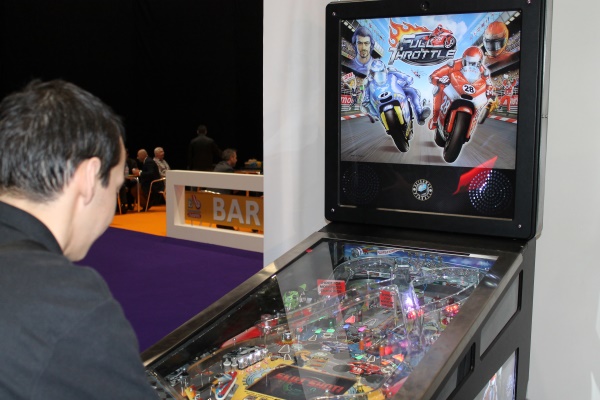 Full Throttle will be launched on January 16th

And finally, there were Minions. Which is nice. 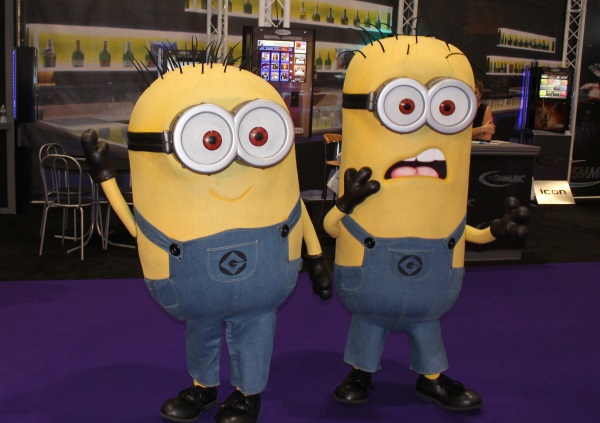