There’s a lot of question marks surrounding Homepin’s forthcoming Thunderbirds Pinball: why the delays, what’s it going to be like, and when’s it going to be released? And above all, who’s the designer behind the game?

So to try to get to the bottom of it all Pavlov Pinball got on the line to Homepin’s factory in China and had a question and answer session with Homepin’s boss, irrepressible Aussie Mike Kalinowski.

Designer touch
So who is designing Thunderbirds? 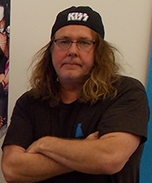 Kalinowski says it’s a top, top American designer who’s been on board from day one and doing a bit of digging it’s pretty clear who that could be. That’s because it can’t be any of the top designers at Stern or Jersey Jack’s, and most of the other well-known designers are spoken for too.

Except for one top-notch designer who’s not occupied elsewhere as far as we know: JPop. John Popadiuk. A man who’s not had the best press recently thanks to the Zidware fiasco.

So we asked Kalinowski directly if Popadiuk is involved in the design of Homepin’s Thunderbirds game. Choosing his words carefully, he replies:  “Many people would suggest JPop is a bad businessman, but not that he is a bad pinball designer,” adding that he will only reveal who the designer is once the game comes out. 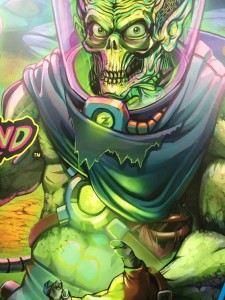 Why the reluctance to reveal the designer until people have had a chance to actually see the game? Kalinowski points out: “If it is him (Popadiuk) involved then I would be tarred by the same brush.”

Since Kalinowski won’t straight out confirm that Popadiuk is the designer of Thunderbirds, the obvious  next step is to ask JPop directly. Pavlov Pinball attempted to contact him, but received no answer one way or the other.

If  Popadiuk is involved in the design of Thunderbirds it bodes well for the game. There’s no denying the fact that the man behind Theatre of Magic, World Cup Soccer, Cirqus Voltaire and Tales of the Arabian Nights is a pinball design genius.

It also makes sense that if  Popadiuk was involved with Homepin he would not have wanted his involvement publicized. Not while he was committed to working on the ill-fated Magic Girl, Retro Atomic Zombie Adventure and Alice in Wonderland.

Whoever the designer is, Kalinowski says the playfield design is now about 90% complete.

Delays, delays
OK, so on to the next question. Why the delay? The game was originally slated for release in early to mid-2015, to coincide with the 50th anniversary of the original Thunderbirds TV show. Then it was pushed back to some time in 2016. 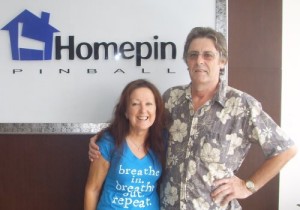 One important reason for the revised deadline stems from the sad passing of Kalinowski’s wife Karen last year. This had a huge impact on the project in terms of personal loss as well as access to vital funds while her estate is being settled, he explains.

“Our small business was structured like many others – she had the assets and I had the liabilities,” he says. “When she passed away I had no access to the funds. I have had eight months without access to money so I have had to pull in on some of the development work.”

The settlement process is very close to completion so things should ease on that score soon, he adds.

The original costings for the project were also based on a stable AU$-RMB exchange rate which had been around 6.5 RMB to the dollar for a considerable time.

But the value of the Australian dollar has deteriorated significantly to just 4.8 RMB to the dollar, leaving a shortfall of some AU$150,000 – AU$200,000. This has also meant the project has had to be slowed.

The good news is that ITV is happy to extend the Thunderbirds license and has been very understanding of his personal circumstances, Kalinowski says.

And Homepin’s sales of around two container loads of Hankin arcade machines a month is enough to cover the AU$32,000 per month costs of operating the Shenzhen factory.

No ordinary DMD game
Next question. What will Thunderbirds be like? The most exciting piece of news to come out of the factory is that the machine will feature electroluminescent side panels in the backbox, driven by Homepin designed 140V AC power feeds.

“These are super-spectacular,” Kalinowski says. “Nothing like this has been seen before, and in a pub it will really make Thunderbirds stand out.”

(Note: in real life the lightning effect will work faster that in this illustration)

Why the backbox side panels and not the cabinet itself? “These things are billed by the square inch, so the side of the backbox is the most cost-effective use of the technology,” Kalinowski explains. The cabinet artwork is likely to be approved by the licensor in the next week, he adds. 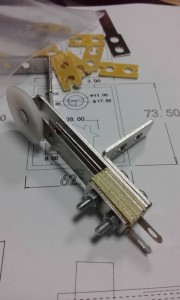 Thunderbirds parts are designed and assembled in China

What else do we know about the machine? It’s going to have two flippers, placed in the conventional position. “Third flippers are a complete waste of time: there’s nothing to shoot for from them, you can’t trap the ball – they are a waste of space,” is Kalinowski’s verdict.

And it will have high quality stereo sound, and a shaker motor as standard.

A possible concern for potential buyers is that Kalinowski has said in the past that it will be a ‘standard, DMD Williams-era machine’. That’s a concern because all other pinball machine manufacturers have either moved on from  monochrome DMDs to full colour LCD screens, or, in the case of Stern, committed to releasing LCD screen technology this year.

It turns out that Thunderbirds will feature a colour display of some sort, although the technology’s not been decided yet. “We are still unsure about LCD – we could use an RGB LED screen,” he says.

Hankin hot on the heels
Homepin’s second machine to be made in the factory, which Kalinowski says will follow on the heels of Thunderbirds, will be an original theme machine released under the Australian Hankin brand.

(Hankin released five games between 1978 and 1980, including the Star Wars themed The Empire Strikes Back.)

“This will be the first Hankin pinball machine for 30 years,” he says. 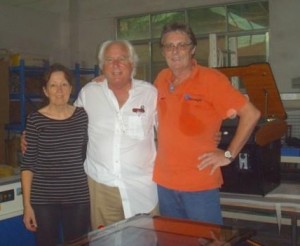 Gary Stern visited the factory in China last year, so will Homepin be doing anything for Stern  at any time in the future? “There are ongoing discussions…” Kalinowski says.

It’s a date
Right. Final question then. When will the machine be released. The answer is that he can’t say for certain , but Kalinowski now hopes to have something to show at the Australian Pinfest event held in Newcastle, NSW, in September 2016.

Pinball may be a passion for Pavlov Pinball and our readers, but Kalinowski points out that people are more important than new machines, talk about designers, and everything else we’ve discussed. The passing of his childhood sweetheart puts that into perspective and he finishes with these wise words:

“Give your wife a hug and tell her you love her,” he says, “because you don’t know when it will be your last opportunity to do that.”