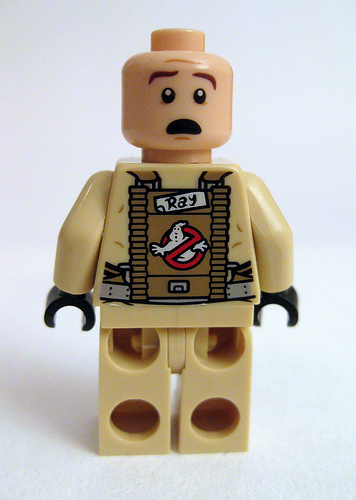 That’s what Pavlov Pinball was told by one of the staff members manning the stand, at any rate. And although there was no Ghostbusters to be seen, he indicated to us that the title was on his price list.

While that’s not official confirmation from Stern that a Ghostbusters is on the cards, it certainly gives more credence to the persistent rumours that that’s the case. It would also suggest that its announcement could be imminent – last year Stern had the then brand new Wrestlemania on display at EAG, so perhaps Ghostbusters was meant to have been on the Electrocoin stand this year, but for some unforseen delay. 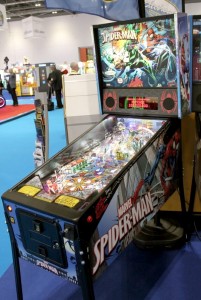 One machine that did make it to EAG this year was the aforementioned Spider-Man VE, and Pavlov Pinball got a chance to get fresh with it. And we have to say it’s an absolute Claudia Schiffer. That’s to say it’s drop-dead gorgeous. It looks fantastic. You get the picture. Side art, lasercut siderails, translite, playfield: the whole thing is truly scrumptious.

And just to make things even more attractive, it plays just like the original Spidey – only better. Oh yes, and the horrible photorealistic dots of the old machine have been replaced by much improved new animation and video art designed around the Ultimate Spider-Man comic art

The only complaint we’ve heard about the Vault Edition is to do with the new speech and sound effects, but there was too much noise in the exhibition hall to be able to comment about that.

There’s also been some comment (OK, complaints) about the higher price of the new machine, given that much of it isn’t new at all. But meh, that’s a business decision for Stern. With Kiss and Game of Thrones just out with Pro as well as Premium editions, not to mention the more niche Whoa! Nellie, no-one can accuse the company of ignoring the operator market or lacking a commitment to getting machines on location as well as into the hands of private buyers. 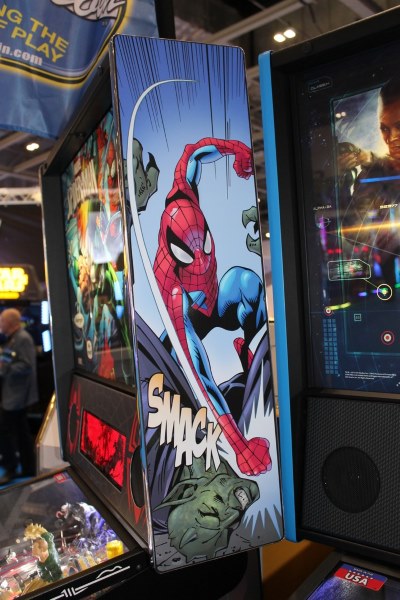 And talking of Whoa! Nellie, it just might be possible that we’ll be seeing more of them in the future, only in disguise. Pavlov Pinball has learned that there could be plans afoot to sell “blank” or “unbranded” Whoa! Nellie machines – tables with unpainted cabinets, playfields bare of any artwork and so on – which can be used as base machines onto which artwork could be applied to create custom electromechanical style machines – perhaps for promotional purposes.

So will Stern make blank Whoa! Nellie machines available to custom builders looking for donor carcasses to brand with their own artwork and turn in to promotional pinball games? “That would depend on how many games,” Jody Dankberg,  the company’s director of marketing and licensing, told Pavlov Pinball.

Sounds like we could see Whoa! Nellies rebranded to promote some brand of beer or maybe a soft drink in the near future…

Ghostbusters wasn’t the only machine that was conspicuous by its non-presence at EAG: another machine that didn’t make it was Heighway Pinball’s Alien.

But it should be ready to go on display at the Texas Pinball Festival in March, according to the company.

There was an Aliens video game though (unrelated to Heighway Pinball,) and that seemed to attract the attention of the local police: 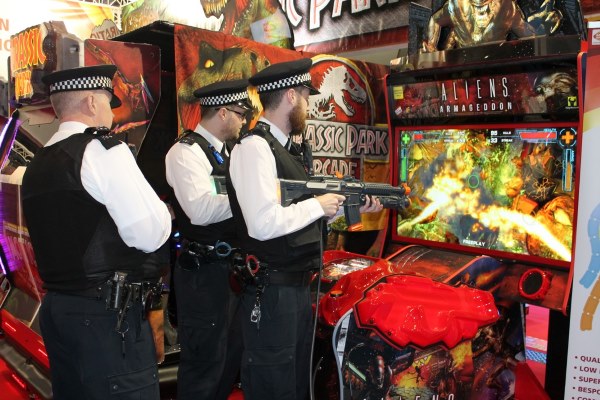 The Heighway stand did have some Alien artwork on display – the same artwork that you might have seen on Pinside posted by Heighway designer Aurich Lawson: 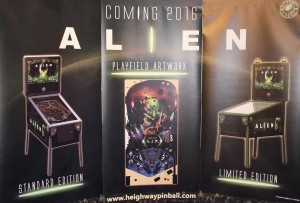 The Heighway stand had multiple versions of Full Throttle to show off – the magnificent model with the full LCD screen backbox, as well as the version with the mini backbox screen, and the now comparatively lame looking one with the static backbox. 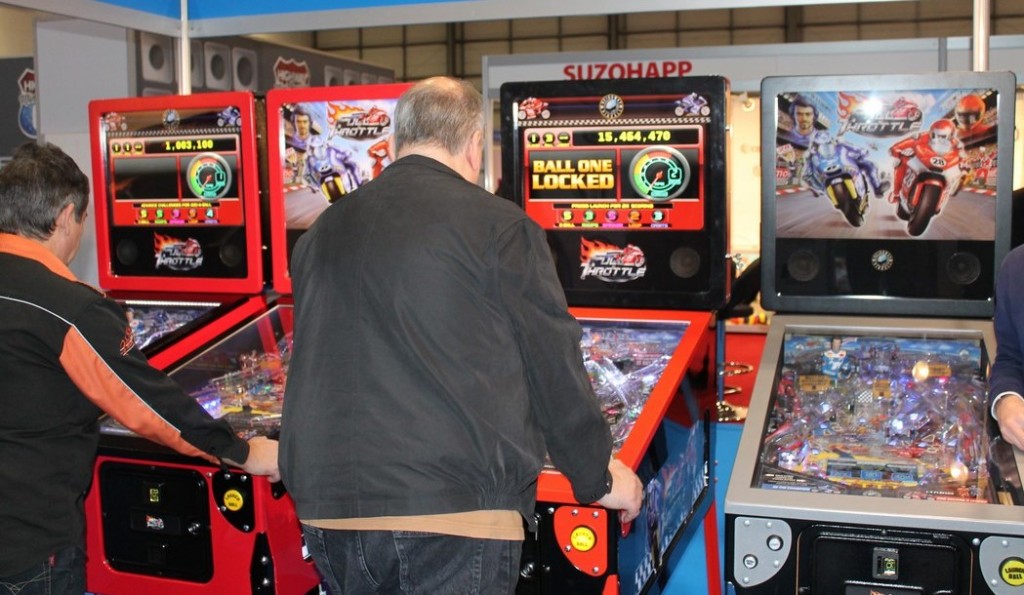 Heighway boss Andrew Heighway was on hand at the stand. 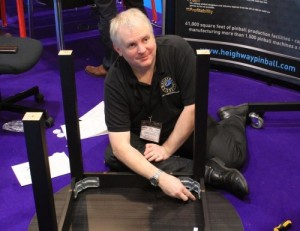 The point he appeared to be making was that if it’s this hard to put together an Ikea table, imagine how hard it is to put together his much anticipated Alien pinball table.

The Hobbit? No sign of it or any other JJP products this year.

And that’s about it from EAG pinball-wise.

So we’ll leave you with a picture of a bizarre walking ticket (no, we don’t know what it was doing either),  a frankly disturbing image containing a bloody dinosaur and two rozzers with machine guns shooting a boxing M&M, and a more soothing image of a rather fetching Alice to take your mind off the previous two. 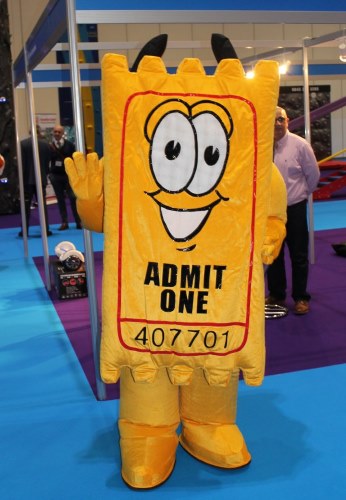 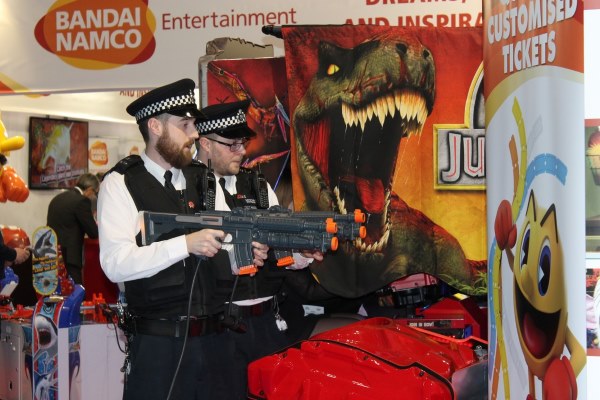 And you thought Plod wasn’t armed in England? 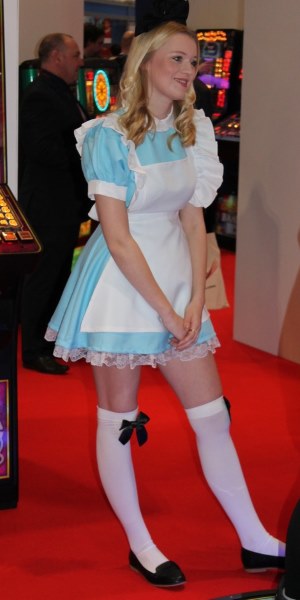