It’s Christmas time here at Pavlov Towers (as, presumably,  it also is pretty much everywhere else in the pinball world.)

So to while away the hours before you can open your presents, here’s a couple of questions for you. Who is Mr or Mrs Pinball – the real person who has featured in some way on the most pinball machines? And how many different machines do you have to feature in to get that title? 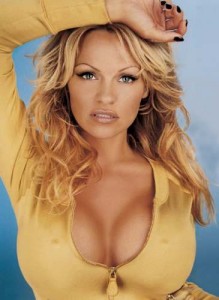 Sega got to use Pammy’s assets in its Baywatch machine

Getting to appear in one machine is relatively easy. Apparently all you need is a large pair of Bristols, like Dolly Parton or Pamela Anderson. Or moobs, likes Elvis. Or be a president of the USSR, like Gorby.

In fact pretty much any minor celeb can get featured in a pinball machine if they play their cards right – just ask Vince Van Patten. He’s the TV colour commentator who appears on the backglass of Stern’s World Poker Tour.

(We’re not going to include cameo appearances which are not relevant to the title, so although Andrew Heighway appears in the backglass of Heighway Pinball’s Full Throttle, that doesn’t count. Sorry Andrew.)

Appearing in two machines is slightly harder. Being an alleged crazy racist homophobe will probably do it: after all, Mel Gibson appeared in Data East’s Maverick and Lethal Weapon 3 machines. 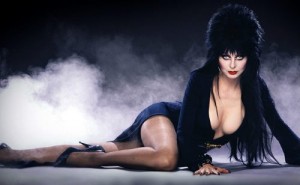 Scared Stiff and Elvira: a nice pair for Cassandra Peterson

And again, being endowed with a generous bosom will always help: it certainly didn’t hurt Cassandra Peterson, who’s featured in Bally’s Scared Stiff and Elvira and the Party Monsters.

In fact there are plenty more people with two pinball machines to their name. All it takes, apparently, is to be slightly more celeb that Vince Van Patten.

Getting onto three pinball machines takes a step up from the Mel Gibsons and Tim Currys in the popularity stakes. In fact you need to be a star. Not a mega star, but certainly a household name.

We know this because six Hollywood actors and one pornographer are the only real people we can come with that have proved popular enough to appear in three different pinball machines: 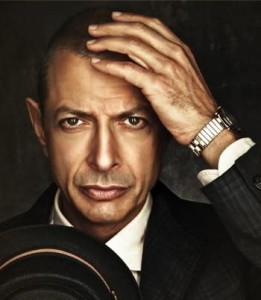 Jeff Goldblum is in the three-up club

You’ll notice here that things have changed. The chests may still be big (or even Dead Man’s), but this time they are not infused with silicon: the three-up club is an entirely male affair.

But that’s not quite the case: it turns out there are (at least) a couple of spacey fellows have appeared in no less than four machines: 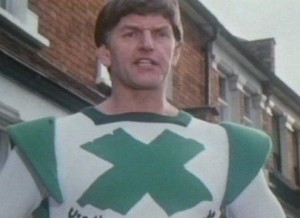 Now there’s no doubting that Harrison Ford is a mega star, but David Prowse? The Green Cross Code man, weightlifter and sometime Dr Who bit-part actor seems to be punching above his weight. In fact David Prowse has a rather non-scary voice, so although he appeared in Star Wars films and four different pinball machines, they got the real Darth Vader in to speak his words.

It still counts though, so well done Mr Prowse (and Mr Ford.) 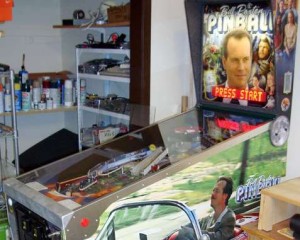 It’s just possible that there’s another name to add to the four-up club: none other than Bill Paxton. That’s because he appears in Sega’s Apollo 13 and Twister, as well as a strange Bill Paxton custom game designed by Ben Heckendorn.

And he may or not feature somewhere in Heighway Pinball’s Alien game to make it four. He was certainly in the movie Aliens, but Andrew Heighway’s not letting on whether he will feature in the follow-up machine to Full Throttle and therefore joining Prowse and Ford in this elite group.

So what about five?

Pulling off the feat of appearing in five pinball machines would require a megastar of almost superhuman proportions. A beast of a man. Someone perhaps half man and half machine. No ordinary man, in other words.

But there is such a man. One person (to our knowledge) has managed the feat of featuring in five different pinball machines. Who else could it be but Arnie?

Yes, Schwarzenegger has appeared in: 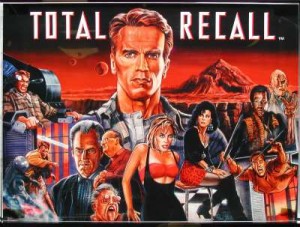 But he also appeared in a game with an unlicensed theme, viz SkitB’s Predator. So that’s four.

And he’s also been in the unreleased Data East Total Recall. So that’s five.

Could it ever happen again? Could anyone else join the five-up club?

You’d have to imagine that – given the popularity of the latest episode – another Star Wars pinball machine could be on the cards. So Harrison Ford could yet join Arnie in the top spot unless something goes very Pete Tong with the franchise.

But for the moment Arnie is the only member we know of.

So well done Mr Schwarzenegger. As the only person to have featured in five pinball machines, you are officially Pavlov Pinball’s Mr Pinball.

So that means Arnie has seven machines to his name.

If we’ve missed out anyone who’s had three or more appearance in different pinball machines – and we’re pretty sure we must have – please let us know in the comments.

Special thanks for help and inspiration for this article to: Dr Adam Ruben, Wei-Hwa Huang and  Pinball Info forum members kevlar, RudeDogg1, windoesnot, mark9, steve brum, RGV, Fintan Stack and J.C. Rox. And everyone else who may have been forgotten.