So it’s pretty exciting that there’s a new pinball feature film in the offing from Canadian outfit Salazar Film: a documentary about Robert Gagno, a young Canadian man who is one of the world’s top ranked players, and who happens to be affected by autism.

A short preview of the film was released recently, and this focused, not surprisingly, on Robert as a person. But to find out what else to expect from Wizard Mode, Pavlov Pinball tracked down Nathan Drillot, who along with Jeff Petry is one of the movie’s directors.

So is Wizard Mode primarily a movie about pinball, or a movie about Robert Gagno and autism? “Pinball is central to this film and central to Robert’s life. So this is both a pinball movie and a coming of age/slice of life movie,” Drillot explains.

Robert’s story from his first contact with pinball at the age of five to his emergence as a world-class player, expanding socially and taking his place in the pinball community, is a heart-warming one. But Drillot believes that the film offers something extra to pinheads.

“I think this will appeal to pinball fans as there is a considerable amount of pinball DNA in this film,” he says. “We talk about strategy, we look at what it takes to become a good player, and many of the world’s top competitors like Keith Elwin, Jorian Engelbrektsson and Bowen Kerins are in it. We have tried to show professional pinball as a sport, with the intense competition, stress and focus.” 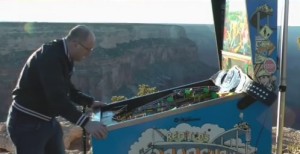 Drillot points out that many people, including causal pinball players, are completely unaware of the world of competitive pinball. The film aims to throw new light on it.

“Based on going to bars, my idea of competitive pinball was a 2-4 hour event with lots of socializing,” he explains.  “It was quite a shock when I went to Pinburgh 2014 and entered a room with 450 pinball machines and a competition going on for fourteen hours a day, for one week straight.

“To think that to make the final four you have to play something like 80 matches – imagine the level of stamina that that requires.”

Pinball is not the easiest sport in the world to capture on film, but Drillot says that his team has made a huge effort to get the technical side of this challenge right.

“At Pinburgh they had a single “top down” camera on a machine, and we found it thrilling to watch a game like that. But we thought “How can we up that?””

“We really wanted to capture visually what is going on. To shoot a game like this you need a lot of cameras: four or five on a machine. And if you multiply that for a bank of machines, at times you need twenty to thirty cameras. So I hope pinheads will look forward to the way we have captured tournament play cinematically.”

But as well as being a film about Robert Gagno and a film about competitive pinball, Drillot says there’s another aspect to the film too. It is, he says, a film about the pinball community. 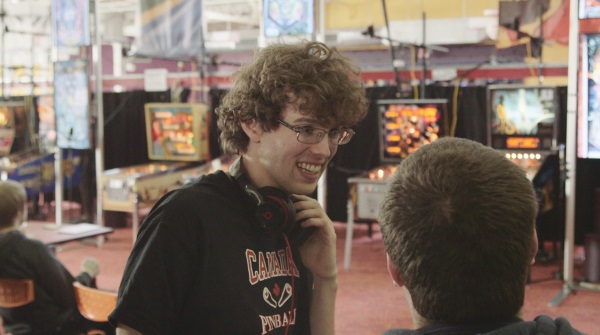 Robert with the pinball community at a PAPA tournament – Salazar Film

“What we found is a group of people who are accepting and supportive of Robert, so the film has a strong community vibe.

“We are not just saying “Here is Robert Gagno, look how great he is.” We are saying “Look at this kid in a potentially difficult situation, receiving a lot of support and kindness, and achieving things in his life that he couldn’t have done without pinball.”

“So this is a film that celebrates the culture of pinball. Other cultures wouldn’t have taken Robert in, but this is an eclectic community that has rallied around him.”

A crowdfunding project on Indiegogo to raise $40,000 to complete the production of Wizard Mode is currently underway and finishes in October.

If, like us, you want to see this film completed as soon as possible then why not head over there and help?

(If you’re planning on heading over to Expo in Chicago in October then here’s a tip: a $100 pledge to the movie will get you a free full registration package to Expo, which would normally cost you $180, but there’s only one of these available so you’ll have to be quick.)