There was plenty of machines with new technology on display at Expo in Chicage – Multimorphic’s Lexy Lightspeed, Dutch Pinball’s The Big Lebowski and Heighway Pinball’s Full Throttle to name just a few.

Stern’s new machine doesn’t have a colour screen or anything particularly new or unusual – and yet. And yet it’s a REALLY good game, expecially with the sound turned up high and the shaker motor  rocking. 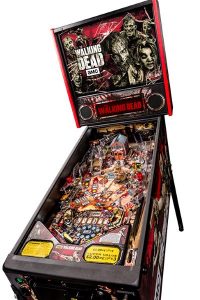 Just goes to prove that technology isn’t everything, and that Stern still knows how to crank out top titles – even with a single colour DMD display.

We also like Stern’s official topper (Pavlov Pinball broke the news that Stern would be releasing official mods some time ago) that was on display during the Expo factory tour. It ain’t cheap at $399, but it looks fantastic.