Imagine handing over  a beaten up old Addams Family playfield, and getting it back a few months later in perfect, minty, as-new condition. 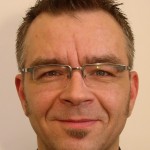 You may suspect some dark sorcery, but that’s all in a day’s work for legendary playfield technician and magician Henrik Maurer, from German pinball outfit Pinball Dreams.

At any one time the company has about forty-five playfields under restoration: usually half a dozen Medieval Madness ones, a good sprinkling of Addams Family (that mansion sure does wear badly), Indiana Jones and Attack From Mars, plus anything else that comes through the door. “We might be working on more or less unknown titles, or we might have a Big Bang Bar in for airbrushing,” he says. 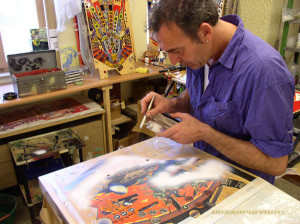 Restoring playfields is not for the faint of heart

Some of the playfields have been damaged in the past by operators’ scalpels as they cut off bits of mylar, some are wrecked by rusty balls and some are just worn by years of use.

“Apart from that I do get playfields where I simply don’t understand how the damage could have happened,” says Maurer. “But that doesn’t matter – it’s possible to repair anything.”

The most difficult to repair are Gottlieb wedgeheads from the ’50s and ’60s, he reckons. “There can be tough as you have to pretty much repaint the whole playfield and redo the lettering. But these are the most fun to work on,” he adds.

So what does a standard restoration involve?

The whole process is about thirty to fifty hours work (not including drying times), but don’t expect a quick turn around: such is the demand that you can expect to wait five months from the time Maurer gets a playfield to the time it is ready to be returned to you.

To test out Maurer’s work, Pavlov Pinball sent in a worn Addams Family playfield for restoration. Here are some of the results of Pinball Dreams’ work: 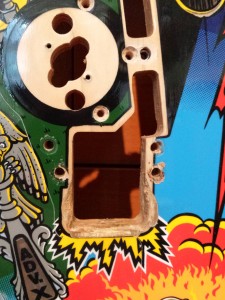 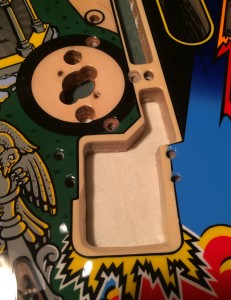 The work involved may sound straightforward, but the magic is in the painting and airbrushing skills of Maurer and his team, and also in the technical solutions he’s developed.

One of these is a toner transfer technique which lets Maurer print tiny letters on the playfield: production credits and copyright info that might appear under the apron, but which are too small to do with an airbrush or stencils.

“We scan the playfield, rebuild the tiny details on a computer, and then print that on foil,” he explains. “Then we heat it up to two hundred degrees (Celsius), put it in water, apply glue and put it on the playfield. In the past it was simply not possible to put writing that is that small on the playfield.” 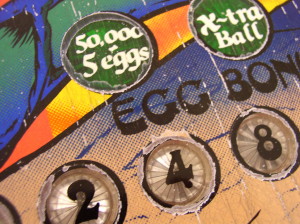 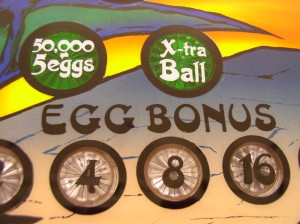 There’s also been a fair amount of work put in to getting the right clearcoat characteristics, he says. “Some of these repro playfields have ceramic clearcoat which is so super-hard it is like glass. I would never use a clearcoat like that. I think that a restored playfield should play the same as the original, and I am a pinball player so I understand how a ball should behave. If you use the right clearcoat you can get a good result.”

For that reason he warns against getting your playfields clearcoated at an automotive shop. “Most of the clearcoats that they use are just not suitable for pins,” Maurer says.

Maurer’s first pin was a Williams Grand Prix which he got when he was nine years old, but he didn’t start working in the pinball business until he got bored with his previous career in marketing less than ten years ago.

That collection has now grown to over 200 machines, and there are no signs that it will stop growing any time soon. “I get offers of machines every day, and it’s very hard to ever day no,” he says.

And what’s his favourite machine? Maurer thinks about this for a second or two. “I love every machine that has ever been produced,” he sighs. 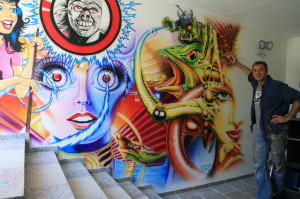