How do you get to win a pinball competition?

It’s an epic understatement to say that this collection of gents and lady know how to knock the silver ball around a bit. And what’s undeniably true is that if you’re interested in competitive pinball they’ve got plenty of valuable advice to share. 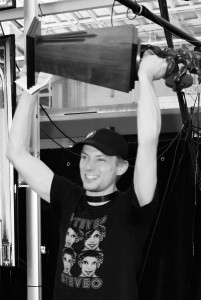 It all came good for Cayle George  at PAPA 17

To do well competitively you certainly need a range of skills, but Cayle George points out that there’s one skill in particular you need to learn to be World Pinball Champion, or just win your local club event. “It is an actual skill to be able to compete,” he says.

“There is no way to get over the adrenaline, heart pounding, shaking hands and loss of critical thinking from the competitive environment other than doing it again and again. It does get better, you will get over it, but it will take experience like everything else.”

Jorian Engelbrektsson backs this up. “For myself, I was a good pinball player before I started competing and it took me three years of competing before I could handle it properly. In the beginning I choked and just felt uncomfortable.” 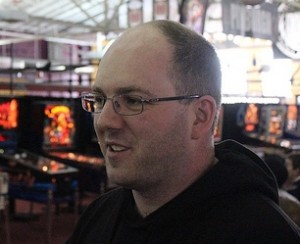 Watching Bowen Kerins playing is a good way to improve

Getting experience in competitions is also a valuable experience for another reason, says Bowen Kerins. “The best way someone can improve their competitive play is to watch others’ play and discuss their decisions,” he says.

“You’ll end up learning a lot about your own play style – you won’t agree with another player’s decisions 100% of the time – but you’ll also realise there is more than one way to play the game. I learned far more from others, especially about skilful nudging, than I could have learned with an unlimited amount of playtime by myself.

(Bowen Kerins shares his tips for winning competitions in this Pavlov Pinball article.)

Cayle George agrees. “The best way to improve is to play with people who are better than you. You’ll learn more in a few games with a stronger player than you will with weeks by yourself. Playing with others will show you new things, or creative takes on the things that you thought were only performed one way. Use the information you learn and roll it into your own skill set.”

Even if you can’t make a competition, these days you can learn by watching video feeds of top players in action, Jorian Engelbrektsson points out. ” I watch all PAPAtv tournaments that I don’t attend for talk on the latest ROMs (software) and strategies,” he says.

What about playing outside of competitions themselves. What kind or practice or training is it worth considering? 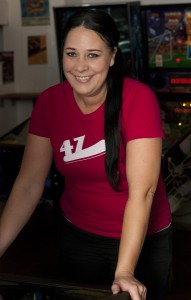 “I think it’s best to start with nailing your techniques – start with practicing the basic techniques such as bounce pass, cradle, post pass, nudging,” says Helena Walter. “It helps your game so much when you learn to control the ball. Then move on to more advance techniques.

“Then I also think you can get better at aiming by shooting a pre-decided shot repeatedly. That’s what I did when I started playing pinball: technique practice and shooting particular shots. I used to have a very particular plan the first years I played: for example ‘Today I will just shoot the centre loop on Ironman, or the skill shot on Wheel of Fortune’.

“I shot the same shot, preferably a hard shot, repeatedly. Or I decided which ten different shots I should make in a row (like a golf course) and then shot them. Or I couldn’t leave the pinball venue if I hadn’t nailed it.”

She also has some counsel for budding female competitors. “My advice to women who are thinking about getting into pinball is to not hesitate, not to let yourself be intimidated, and just get in there. Being a woman or a man really doesn’t matter when it comes to pinball.”

Comfort on the ball 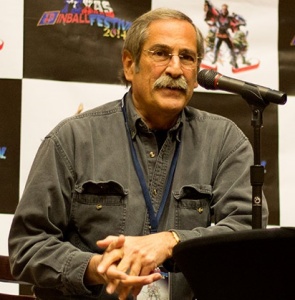 Roger Sharpe founded the IFPA – and much more besides…

Aside from honing individual skills, there’s a lot to be said for learning-by-doing: improving your pinball just by playing and playing and playing some more. “With pinball, practice is a key component, especially for the beginning player,” says Roger Sharpe. “There needs to be a comfort level with the flippers regardless of the game – working on timing and anticipation, reaction, concentration and focus.”

Trying to put new skills into practice during games can be disheartening before you have quite mastered them, but Josh Sharpe urges perseverance. “Typically your play becomes much worse when trying a new skill, as it’s not ‘natural’ when you start trying to use it, so your quality of play definitely suffers,” he says. In other words: you may end up Shatzing the outlane instead of the inlane.

“The only remedy for that is enough practice to make it feel like a natural part of your game, and being completely comfortable with those techniques,” he adds.

As with any sport, there are ways of maximising the benefit you get from your playing time by training smarter or more productively. And it’s apparent that all the top players have their favourites.

For Cayle George it’s all about having a pair of balls. “Want to give yourself a reason to put on your try-hard pants? Set your games up hard, then drop them down to two balls,” he advises. “You’ll quickly realise the strategies that yield the best potential to consistently score high. This is one of the best ways to wrap your head around risk and reward and what it takes to qualify at a major event.” 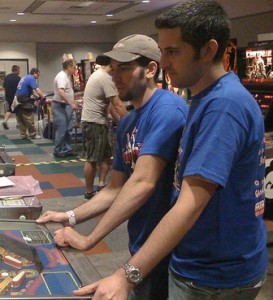 Josh Sharpe (r) letting his brother do half the work

Josh Sharpe does something similar. “The biggest challenges I’ll throw at myself is after having a bad Ball One, or even two bad balls to start a game, is to use that game as a moment to challenge myself to reach some X score.

“I find many people tend to simply restart games after a house ball (quick drain) start, and that really takes the sense of urgency out of needing to perform well especially when things aren’t going your way. Very rarely in competitive pinball are you showing up and playing your best game when you need to. It’s more about managing those ‘bad games’ and making them better to hopefully turn losses into wins.” 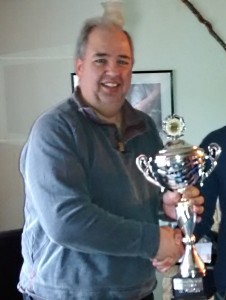 If you got a machine or three of your own then it’s tempting to practice on those as much as possible, but UK’s Martin Ayub warns that this may not hold you in good stead when it comes to a competition. “While it will help you learn the rules and develop a strategy, the machine you play in tournament is likely to be set up very differently and the shots will be in different places on the flippers,” he says.

“How many times have you heard people complain that that can usually score hundreds of millions on their home machine but struggle to break ten million on that same machine in competition? To that end, my home machines are mostly set up in tournament mode with wide outlanes, tight tilts and no extra balls.”

Setting up the machines to be psychotic monsters is a technique that Australia’s Steve Edwards employs. “With the training for IFPA 10, I jacked up and put blocks under the back legs of every machine to make them play super fast, as well as setting the tilts very sensitive, sometimes so that you couldn’t walk past them without tilting,” he says. “When there is a serious comp coming up, like to win a machine, then I would practice every day for at least three to five hours in one session.” 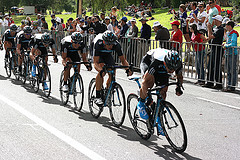 An important part of training for many sports like running or cycling is to set training goals and record your training results to check that the training is effective and to stay motivated. None of our top pinball players are quite as methodical as that, but Cayle George does do something a little bit along those lines.

“I run a tournament against myself at home, (with) PAPA style qualification: I play a five game set across five different machines,” he says. “I then log that result in a computer against every other five game set I have played. It’s standard qualifying points, so 100 for first, 90, 85,84,83,82… summed up across all five games.

“In doing so I can rate a set of scores against other sets of scores I have played in the past. It’s a great way to get the thrill and motivation of competition at home.”

Any other tips for those entering the word of competitive pinball? Roger Sharpe offers this: “If it is going to be a marathon of many hours strung together over a day or multiple days then diet and rest become a bit part of the equation, along with knowing how to pace oneself so that you’re not burned out when you need to be burning bright.

Bowen Kerins stresses that if you want to win, don’t forget to enjoy yourself. “If you’re not having fun, you’re doing it wrong,” he concludes. “I’ve been there a few times and it does not lead to success.”

And Steve Edwards has his own recipe for success: a good old laid back Aussie attitude. “I don’t worry about it. I just step up and hit it,” he says. 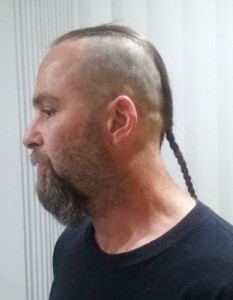 If only it was that easy for the rest of us…