Gobsmacking things in the world of pinball that make you go “nghuuuuurrrr?” are like buses: you wait ages for one and then three come along together.

But what else can you say but “nghuuuurrr?”  when you cop an eyeful of the amazing, unbelievable, weird and whacky work of the extraordinary German pinball hobbyist and manufacturing genius George Billig. 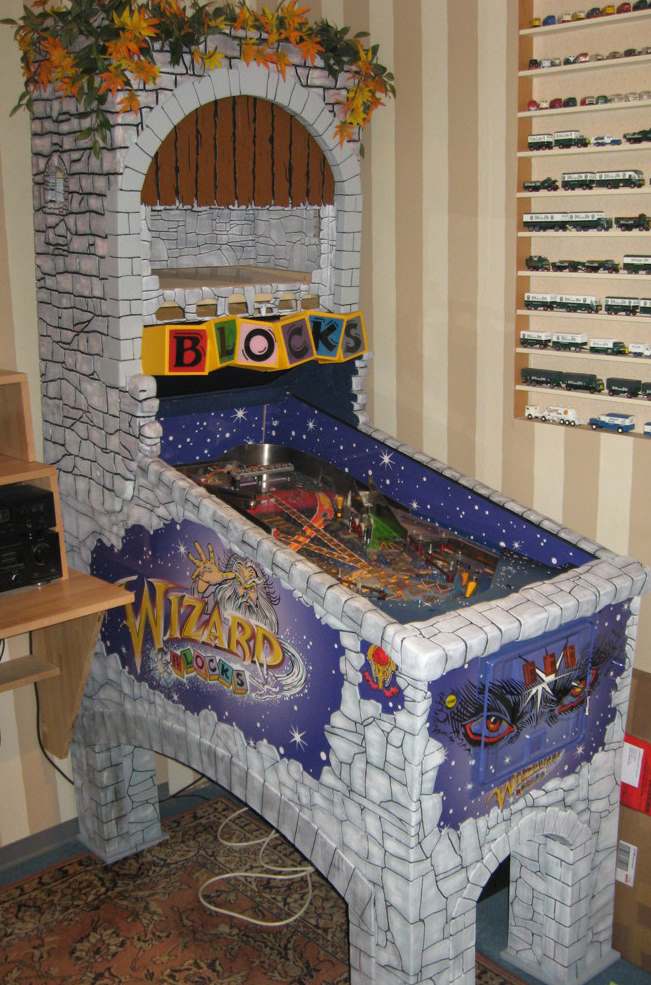 Billig has spent well over 2,000 hours on his Wizard Blocks pinball machine

Billig is no ordinary pinball aficionado. For nearly twenty years he was a professional model maker, and he uses the skills he picked up in this line of work in his pinball making. He embarked on a project to make a widebody Addams Family back in 2008, and for quite some time now he’s been working away building himself a Wizard Blocks and a Medieval Madness as private projects.

He agreed to talk to Pavlov Pinball about his projects, but shortly after had a change of heart. The good news is that while he didn’t want to talk in person, he did give us permission to use his photographs and write about his work, as well as some indication of what he’s planning for the future. 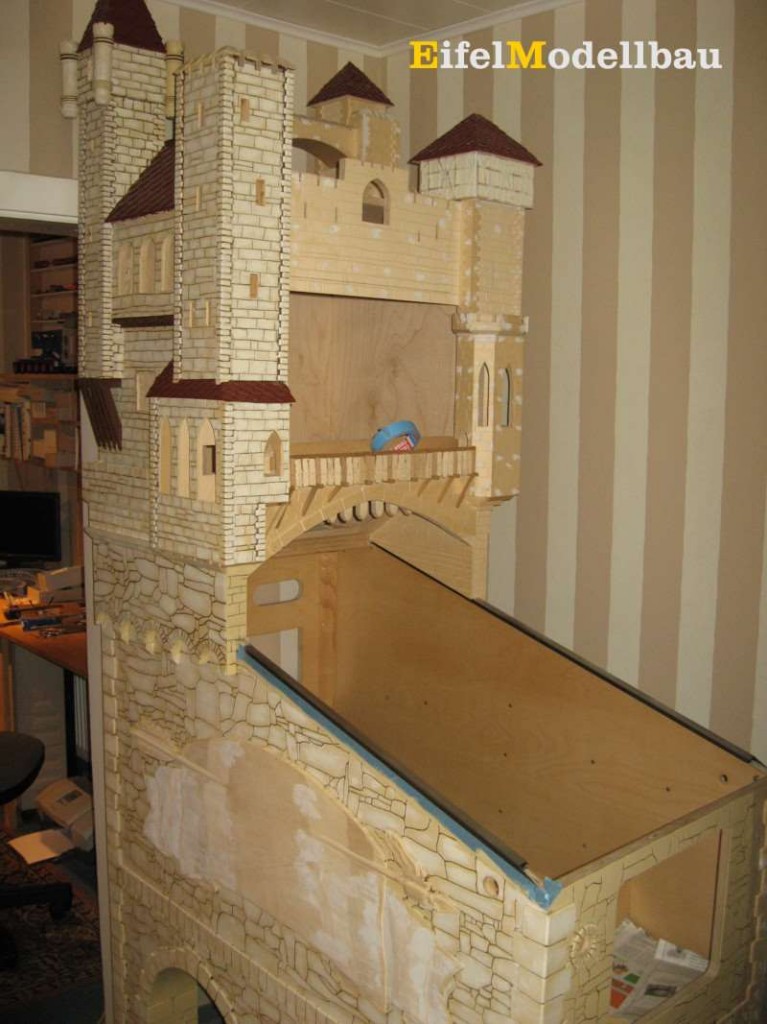 Billig’s Medieval Madness: slightly different to the version that Stern will be building in its factory

And it is pretty unusual stuff. Thought up in his head, it’s brought to life using the equipment he has at his home: this includes an injection moulding machine, an EDM (electro discharge machining) machine, and a 3D CNC (computer numerical control) router he built himself to make his own unique cabinets, playfields and ramps, as well as typesetting and printing equipment that he uses to make custom circuit boards. 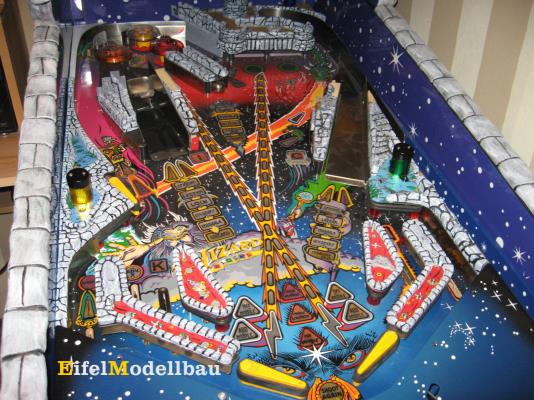 A new Wizard Blocks playfield will be designed next year, apparently

This year he plans to bone up on 3D construction design and computer programming, and next year he hopes to start on new pinball projects including Ghostbusters 3, more Medieval Madness, and Wizard Blocks with a new playfield. 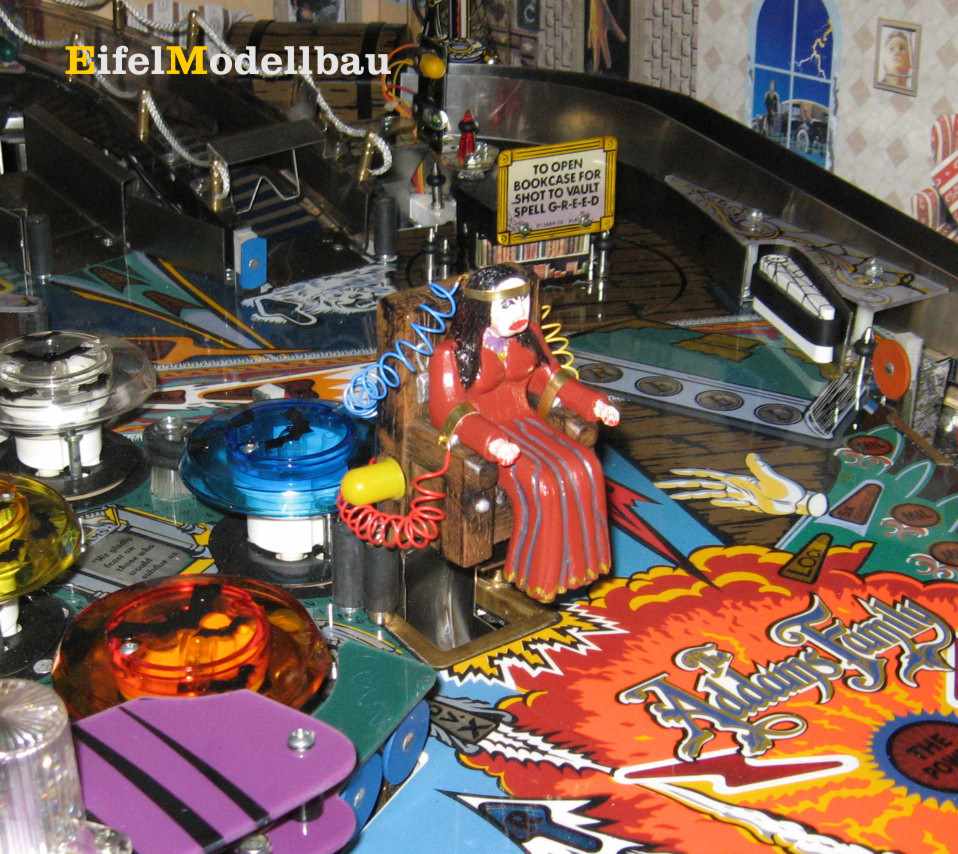 This is actually a little disturbing

The old widebody Addams Family will be broken up, and the special parts will go in to “a new animated TAF game.” Intriguing if a little mysterious.

He also talks of a new software system written in C and running on Windows XP.

Cabinet making, playfield designing, airbrushing, modding, circuit board constructing, software developing. Is there nothing this chap can’t do?

Billig’s machines may not be to everyone’s taste, and without playing them it’s impossible to have an opinion on them as games. And they won’t be on public display, although he says he may post a video of them on YouTube.

But there’s no denying he has a very special, if unusual, talent for building pinball machines, and for that Pavlov Pinball salutes him. 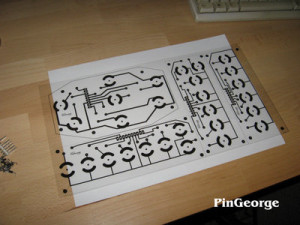 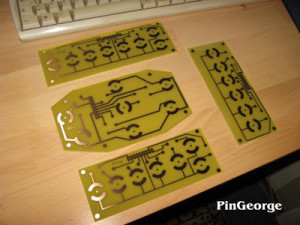 is used to make custom boards 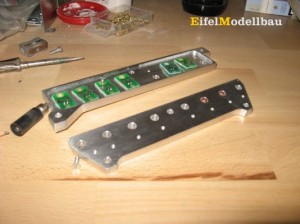 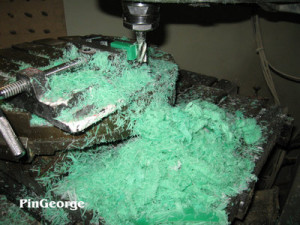 Billig mills his own Teflon parts