Twenty years ago it was almost impossible to avoid the sounds and flashing lights of pinball machines in pubs, student bars and amusement arcades.

Competition from electronic arcade machines and fruit machines helped drive them close to the brink of extinction. But now these giant mechanical tables could be set to enjoy a renaissance.

New pinball companies are springing up to reintroduce the world to the physical pleasure of flipping “the silver ball.”

What’s behind the apparent resurgence? Ironically it’s computer games, according to Andrew Heighway, managing director of Heighway Pinball, a UK-based company that plans to release its first machine shortly.

“There’s been a huge boom in pinball smartphone and console games over the last few years,” he explains. 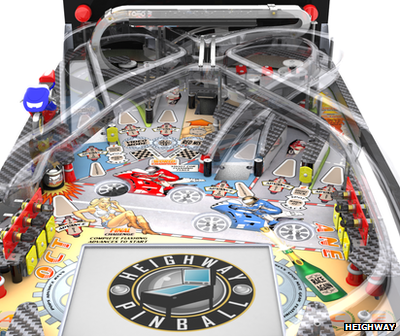 “Many of the kids that play them have probably never seen a real pinball machine. A whole generation has missed out – but thanks to these video games, there are plenty of kids that have been primed for the real thing.”

Gary Stern, president of Stern Pinball – the only company that has been manufacturing pinball machines continuously over the last decade – confirms the trend.

“We’ve seen sales up by 30% in the last year, so there is absolutely a resurgence in interest,” he says.

Used machine prices have also shot up in price.

That doesn’t surprise Andy Netherwood – a pinball repair man known in UK pinball circles as The Legend for his ability to bring almost any broken-down machine back to life. He says that the number of machines in private hands has also been growing lately.

“Twelve years ago, when I started, I used to do one or two repair jobs each week, and later it became a steady one or two day per week job,” he says. “But recently I’ve been out doing repairs four days a week or more.”

Those opting for a new machine are being promised a range of innovations.

The screen will work like the heads-up display (HUD) used by military pilots – except it will work heads-down: explosion effects and other graphics will be superimposed over users’ views of the playfield.

Heighway, Stern and Jersey Jack Pinball – another new company that’s about to launch its first machine – all have plans to imitate video games by adding an online social component to their machines.

Players will be able to register themselves at a website, and then identify themselves to a pinball machine, perhaps logging on with a username and password.

Players will be able to pay for games using credit previously added to their online account, or by sending a text message from their phone, Mr Heighway adds. That could solve the problem of running out of coins – although it’s not clear what would happen to the tradition of placing a coin on a machine to stake a place in the queue to play.

Some pinball machines have bewilderingly complex rules that govern how to win extra balls and jackpots. 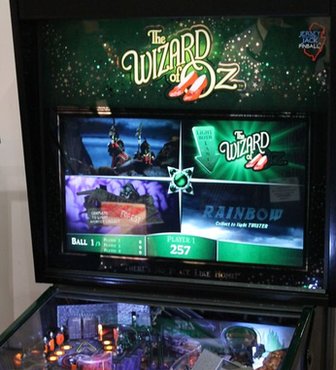 Wizard of Oz features LED lights and a video backglass

In the past players were expected to learn them by watching others play or through trial and error, but Stern Pinball has introduced QR codes on its latest machines which can be scanned with a mobile phone to bring up instructional videos.

Jersey Jack Pinball is led by an irrepressible games industry veteran called Jack Guarnieri. He wants to widen its appeal beyond its male core audience to include women and children.

I think it’s very important to keep people who are watching the game as well as the players entertained, so adding a big video screen was important

His firm’s first machine, due to launch in early spring, is called The Wizard of Oz.

It incorporates a giant colour LCD screen in the backbox that sits at the end of the playfield. It takes advantage of the processing power built into the table to display custom animations and clips from the film as the game progresses.

“I think it’s very important to keep people who are watching the game as well as the players entertained, so adding a big video screen was important,” Mr Guarnieri said.

“These days young people won’t respond to static images on a backbox, no matter how striking they are.”

To read the rest of this feature, please visit BBC Technology