Pinball machines these days are released with incomplete code – as anyone who has bought a NIB Stern machine or JJP’s Wizard of Oz will confirm.

It’s probably unavoidable given the realities of running a manufacturing business, whether you think that it’s acceptable or not to ship a game without all the rules.

But it got us thinking here at Pavlov Pinball: how do rules come about? Do designers create a playfield with particular rules in mind, or do they just build something with popup trolls here, or a giant bell there, and let the programmer get on with writing some cool rules which fit with the playfield features and toys? 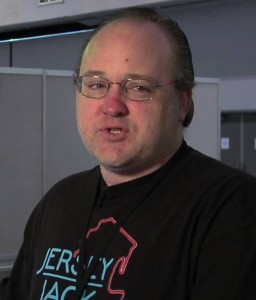 Keith Johnson has coded for Midway, Stern and JJP

To find out, Pavlov Pinball got on the dog and bone with programmer Keith Johnson, a former Stern coder now at JJP.

Johnson has many great games to his credit, including Lord of the Rings, The Simpsons Pinball Party – a game with a frighteningly deep ruleset – and Family Guy from Stern, and Wizard of Oz and now The Hobbit from JJP. He even worked on Revenge From Mars at Williams back in the late 1990s.

Johnson says that in most cases the coder will see the playfield design as it progresses from early CAD drawings through to the point that a whitewood is made, and have some involvement. “I’ll usually see it at various stages, and we’ll discuss it as it matures. It’s about tweaking what’s there,” he says.

“When a designer shows me a playfield I may make a suggestion like adding a diverter to make the ball pass more interesting. I would rather see two things being able to happen instead of just one. One of the reasons for the success of Lord of the Rings was that each shot can result in more than one thing.” 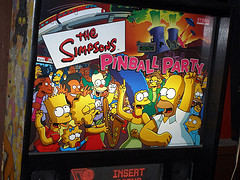 He says he always has a full plan for a game. “I’ll start with a document that describes how the game goes, and then drill down and fill out the features. It’s a matter of sitting down and thinking about it or talking with the team, and ideas pop up.

“I had the whole of Lord of the Rings sketched out – except for some of the modes – before the whitewood was produced: I knew there would be three movie multiballs, so it was just a matter of fitting them to the playfield.”

Modes are often a matter of providing a reason to do a particular shot or combination of shots, and then matching the mode to a particular aspect of a theme. The design team as a whole often pitched in with suggestions about which scenes from the movies The Wizard of Oz and The Hobbit should be included in these games, Johnson says. 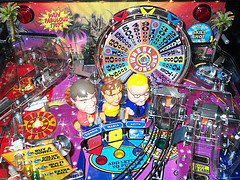 One of Pavlov Pinball’s favourite games. Cheesey? Not at all.

But as you’d imagine, it helps to have a good knowledge and be a fan of the theme.

“Nearly every game I’ve worked on I’ve been into before,” says Johnson.  “I liked Lord of the Rings and The Simpsons, I was a fan of World Poker and knew the show so I didn’t have to do too much research. And I watched Wheel of Fortune and I don’t think there was anything that anyone could have told me about the show that I didn’t know already. Maybe not The Wizard of Oz, but I did watch it four or five times before deciding what the ruleset should be. ”

Is there a secret to making rules that are fun? “I’m a pretty decent player and I’ve played a lot of games,” says Johnson. “That means I know pretty well when an idea for a new rule will be fun – or else I use a rule I have used in the past with a little twist to make it even more fun.” 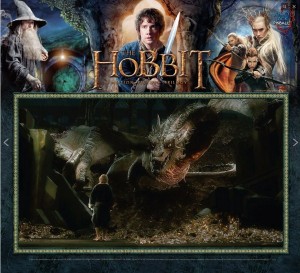 About 1500 The Hobbits have been presold

What does he think about shipping games with incomplete code? Wizard of Oz has benefited from some updates since the game was first released that really enhance the game.

“It was painfully obvious with Wizard of Oz (that the game was incomplete), but there was an unprecedented amount of work to be done with the new hardware system,” he says.  “The goal was always that the rules should be as full as possible, but if you are a manufacturer you have to manufacture or you lose money.

“We have presold 1500 Hobbits but we want the game rules to be compelling as soon as possible, because first impressions are so important.”

An interesting question is whether over the years Johnson has learned any golden rules of game coding – things that should or shouldn’t happen in a game?

It turns out that he  does have one, and it’s about upper playfields. “The number one rule with an upper playfield (as a programmer) is to get that ball off it as quickly as possible, because you can’t lose the ball when it’s up there,” he says. “You can lock the ball there, or may be start a hurry up which gets the player to get the ball off the playfield.” 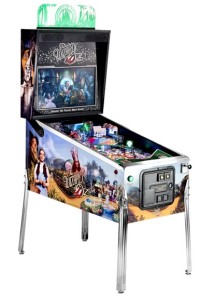 It’s certainly true that most upper playfields and rulesets are designed so that the ball doesn’t go there often or stay in play there for long but that’s not always the case: a modern exception would be Stern’s Wrestlemania.

So how does Johnson know, or decide, when the rules to any game are “complete?”

“I do have an idea of what I want to get done up front,” he says. “I do my best to have multiple layers in games so that initially it is fun enough, but when you complete a group of modes or multiballs you get to something else. Some people may think that that is too much, but that lets the game grow with you.

“If you achieved everything in three days then you’d wonder why you had spent so much money on a game that you mastered so quickly,” he concludes.

Wheel of Fortune photo by PhotoFox5000