3D printing technology is revolutionizing the world of pinball mods, and the good news is that means they’re going to be better and cheaper than ever. 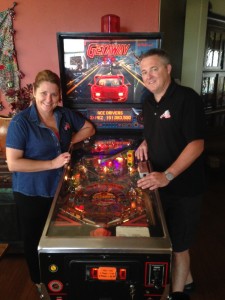 Tim Mezel, boss of Albuquerque-based Mezel Mods, got into the modding business when his attempt to make a Donut Heaven for his High Speed II out of plastic sheets didn’t quite work out. The problem? Simple:  “It just looked horrible,” he says.

But his fortune changed when he accepted that he lacked artistic talent, and bought a 3D printer. “I printed off a new Donut Heaven, posted it on Pinside, and sold quite a few,” he explains. “So I figured that I could pay the machine off, and have just expanded from there.”

Kristin, Mezel’s wife, runs the daily operations side of the business.

Mezel’s most successful mod to date is Metallica snake fangs. He’s sold over one hundred and sixty sets, and it’s a popular mod for the same reason that Donut Heaven is, he reckons. “These are both mods that should have been on the machine from the start.” 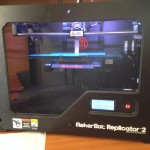 Mezel’s 3D printer churns out mods in about an hour

The fact the fangs are just $15 probably doesn’t hurt either. Nor does the fact that they don’t break off – unlike the original Stern ones,  which failed so often that the company decided to make the Metallica snake fangless. More like a sleepy tortoise than a bad-ass snake, in other words.

To give you an idea of the quality of the stuff coming out of Mezel’s printer, consider this: Metallica designer John Borg bought himself a set of fangs at the Texas Pinball Festival, pronounced them “better than the originals,” and then bought another pair for Lyman Sheats Jr. (the game’s programmer) as well, Mezel says. That’s not a bad endorsement.

I look at the playfield, the theme, the way the manufacturer has made the toys. I stare at the machine and figure out if I can add anything cool 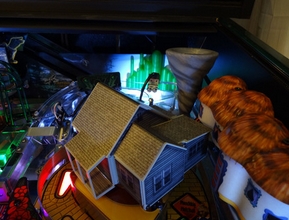 Spot the tornado next to Dorothy’s house

So where do the ideas for mods come from? Sometimes game owners suggest them, and Mezel then designs and prints out prototypes which are tweaked and go back and forth until they are ready for production. That’s what happened with a Tiki doll for a Ripley’s Believe It Or Not, suggested by someone down in Florida. And with the Wizard of Oz tornado mod – that one belonged to Mezel’s neighbour.

Otherwise Mezel checks out new machines for their modding potential. When he finds a promising pin, like the new Stern Star Trek, he buys one, builds mods like they’re going out of style, and then flips the machine on. “I look at the playfield, the theme, the way the manufacturer has made the toys. I stare at the machine and figure out if I can add anything cool.”

Sometimes that works – like the Metallica fangs – and sometimes it doesn’t: Mezel’s least successful mod ever was a Klingon insignia for Star Trek which he got very excited about, but sadly didn’t excite anyone else.

The beauty of a 3D printer is that you can design a mod, print it out in about an hour or so, and try it out. And Mezel never prints out more than a handful at once, so if a mod bombs – as in the Klingon fiasco – then it’s not the end of the world. 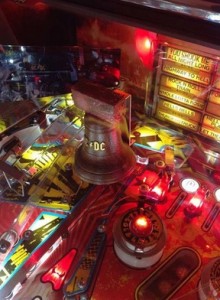 Hell’s Bell. And a mod above it

What’s in the works for the future? Mezel has an AC-DC on order as “there are mods to be done”, and he has his eye out for the next John Borg game. But don’t hold your breath if you’ve just got hold of a BNIB Mustang. “I’ve looked at that game, but there just doesn’t seem to be much modding potential,” says Mezel.

And a few years from now – who knows? Maybe you’ll be able to download the plans for the latest Mezel mod and print your own copies at home.

In the meantime, you can check out all the Mezel Mods at mezelmods.com