If you’re a fan of Quentin Tarantino, you’re probably dying to get your mitts on Pinnovating‘s Kill Bill pinball machine. 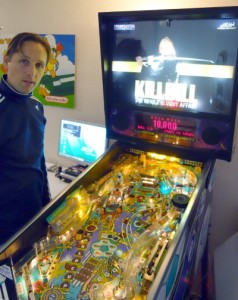 Kill Bill is based on a World Cup Soccer 94

The man behind Pinnovating is Dutch nice-guy Dennis van de Pas (has anyone ever met a Dutchman who isn’t a nice guy?) If the name sounds familiar, it’s probably because he was the software chap for the team that converted a Johnny Mnemonic into a Matrix pinball machine last year using the P-ROC system. He also did the software for Demolition Man on Steroids, so Kill Bill is his third major pinball project.

Van de Pas has mostly gone solo (so far) with Kill Bill this time, but despite the heavy workload he expects to have a completed Kill Bill machine up and running in time for Expo in Chicago next year.

It turns out – and this is a pretty bizarre revelation –  that Kill Bill was originally going to be a Disney-themed game, but van de Pas changed his mind at the last minute. “We like to go to Disney theme parks and I didn’t want to spoil one hobby with another,” he explains. “Demo Man took about 1200 hours of programming, and Matrix about 2000 hours and sometimes you just get tired of it – it’s not all fun.”

He adds that getting recordings of the sounds on Disney rides is not easy – much harder than getting sounds from a DVD of  Kill Bill. 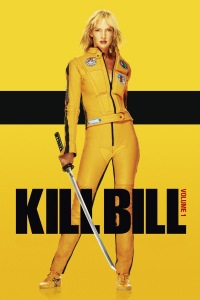 So from the squeaky-clean world of Disney to the blood, guts and stylised gore of Kill Bill. That’s a bit of a change – how in the name of everything holy did that change of course come about?

“Quentin Tarantino is a great director, and I like the theme with the violence – justified violence of course – the setting, and the music,” says van de Pas.  “There are so many different styles ranging from Spaghetti Western to Kung Fu, there’s the tension between the characters, the Pussy Wagon… just so many elements to put into a game.” 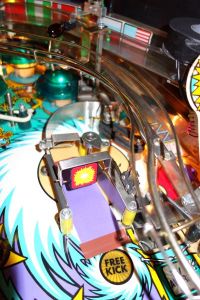 Like Matrix, Kill Bill will be made from the carcass of an existing game, and in this case it’s World Cup Soccer ’94 that’s heading to the chop shop. “I think that it’s a game that is pretty underrated,” says van de Pas. “There are long ramps, the left loop, the goalie, the difficult popper shot next to the goal… I can see potential for some great shots and modes.”

This time round van de Pas is going to be doing more than a straight retheme though: his plans call for some hardware changes as well. There is going to be a Stern style auto-launcher added alongside the conventional plunger, a new, short lane next to the TV popper, a spinner, and magnets – amongst other things.

“I do it all by trial and error, ” he explains. “I take ball guides from an old scrap game and then start bending stuff. I put it in position to see if it does what I want, and that it doesn’t spoil any other shots. Eventually I start screwing things in to the playfield.”

So what’s the game going to be like? Will the player be Beatrix (Uma Thurman), progressing through the game by killing members of the Deadly Viper Assassination Squad and finally Killing Bill?

Van de Pas says it won’t quite be that simple, and the idea will be to incorporate parts of the film as much as possible, with different modes for different characters. 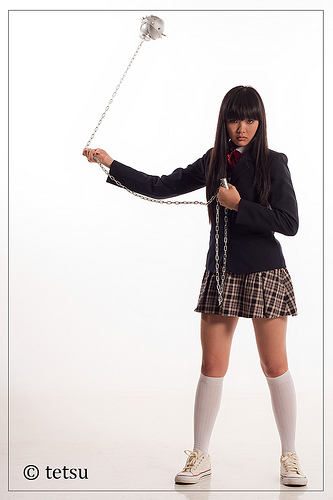 You don’t want to mess with this particular schoolgirl

He promises that some of the modes will be complex. “The idea will be to connect modes by collecting things related to other modes during a particular mode,” he says. “For instance, during Elle Driver mode you can collect a million dollars which you can use in Bud mode to buy his Hattori Hanzo sword.”

What about multiballs? The main one is the Crazy 88 multiball, but there will probably be three or four in all, says van de Pas.  “When I am programming I get new ideas, so it is hard to say for sure.” 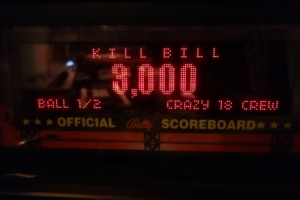 After that is all gets a bit crazy: shoot another 88 switches to complete Crazy 88 multiball and progress to the wizard mode. Meanwhile you can rack up points by collecting and stacking  jackpots to 4x the original value by avoiding the goal and making other shots instead.

And after collecting a jackpot, no matter what it’s value, you can collect the super jackpot next to the goal, which you can boost up to a 4x super jackpot by making different shots first….

Well you get the idea. You may not have followed all of that, but it’s pretty clear that our man van de Pas has got a deep set of rules all worked out.

As far as visuals and sound are concerned, the DMD is going to be showing clips from the films, and the speakers will be playing movie callouts. “I’m going to cut the sound in all kinds of pieces,” he says. “You can combine sentences and make characters say something that they don’t actually say in the movie.”

Will there be toys? Oh, yes, there will be plenty of toys. Beatrix will be there, along with the Crazy 88. “And we will have to have a Pussy Wagon on there too,” he adds.

When it comes to artwork, van de Pas will probably be doing the cabinet decals himself. The playfield will be hand painted (like the Matrix,) but it’s not been decided yet who will be doing it. 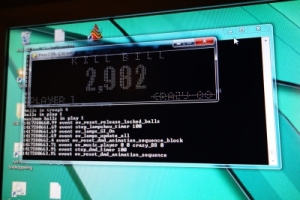 Make no mistake: this project is a mammoth task. Van de Pas gets home from his accounting job most evenings and has something to eat, then starts working from 7.30pm or so till 10.30pm or 11pm. On Saturdays and Sundays he starts early and works till 6pm or so, aiming to get in about 15 hours each weekend.

And this kind of effort can’t go on for ever. “This is the last project I do like this,” van de Pas says. “If there is a fourth project, it would have to be commercial. If Jersey Jack or Heighway Pinball or Dutch Pinball said ‘Do you want to come and do something for us?’ I’d be interested.”

And with talent like this going begging, why not?