There’s a small industrial unit in deepest South London that’s filled with pinball treasures. To find it you have to locate the right residential street and spot an old black iron gate. 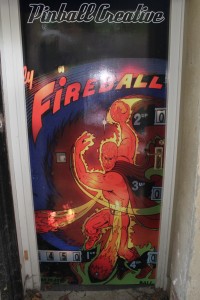 Playfields for doors. Something’s up…

If it’s not locked you can head down an unpromising alleyway until you get to a wooden door. Only then do you get a hint that you’re on the right track: the door has been painted to look like a giant Bally Fireball backglass.

This is the entrance to the workshop of Pinball Creative, where proprietor Giacomo Malvermi brings old and worn out electomechanical (EM) machines from the period 1958 – 1979 and restores them to their former glory. Malvermi, 52, is an  ex-shipping salesman, and his love for pinball is so strong that it’s almost palpable. 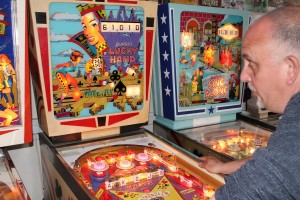 “The idea I have is to restore pinball machines from the period I think is the golden age back to the condition they were in when they were made,” he says. “My passion is restoring things and making them beautiful.”

To do this he works closely with German restoration expert Henrik Maurer from Pinball Dreams, who’s responsible for repairing and repainting playfields, restoring or reproducing backglasses, and recreating plastics if necessary. 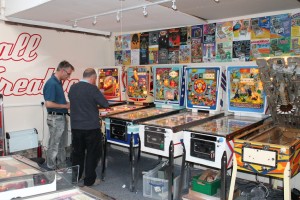 The first machine Malvermi walks over to is a  1958 woodrail Genco Fun-Fair which Maurer acquired for him in Austria. “She was a favourite of the vendor, but completely dead,” Malvermi explains.

Not for long. Once back in London, Malvermi got it going again, and it’s well on the way back to full working order. “I have stripped down the playfield, rebuilt the bumpers, and taken out the stepper unit and completely cleaned it. I will completely repaint the cabinet, and Henrik will repaint the playfield.” 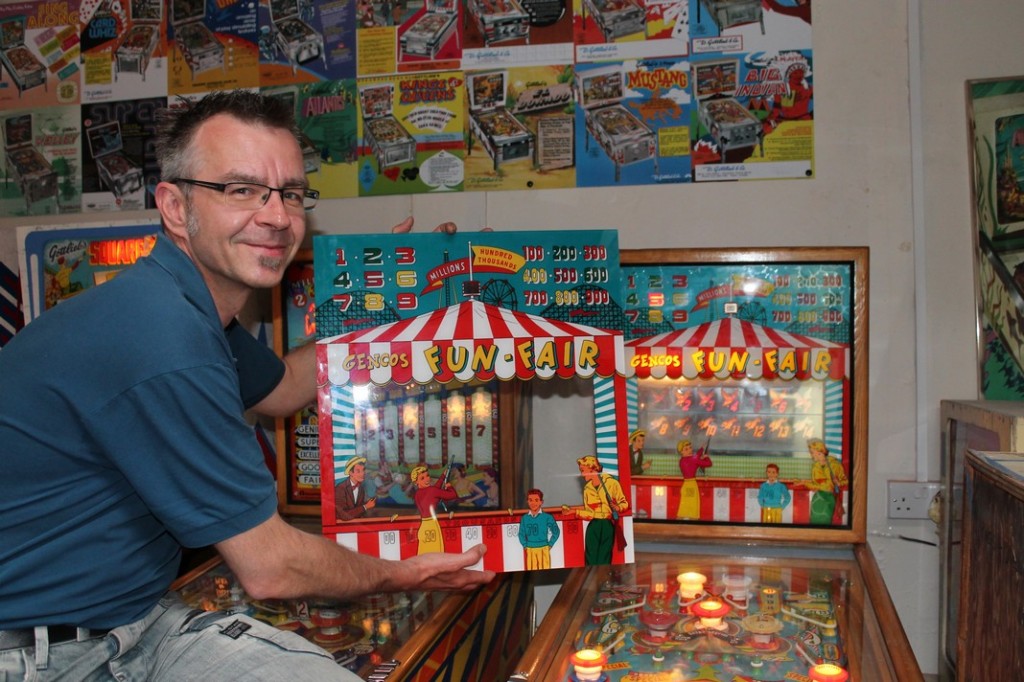 The backglass is in fair condition considering its age, but this is not good enough for Malvermi the perfectionist. And at this point Maurer appears with a package which he’s brought over from Germany and which he gingerly opens. Inside is a brand new and flawless reproduction of the original Fun-Fair backglass that he’s made himself. 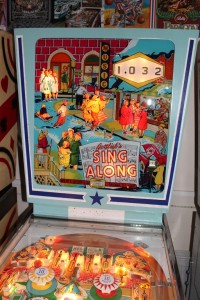 Making it involved scanning the original backglass, painstakingly matching the colours of the original, and painting directly onto a new piece of glass – a job that took almost thirty hours to complete.

The problem is that when you are as passionate as Malvermi, it’s hard to get rid of the machines that have been so lovingly restored. “Will I sell her? I doubt it,” he admits.

Close to the Fun-Fair is a 1958 Sitting Pretty woodrail – probably the only one in the country – and two newer Gottlieb machines: a 1977 Lucky Hand add-a-ball and a 1967 Sing Along. The Sing Along in particular is gleaming, having had the full Malvermi treatment.

To restore the cabinet Malvermi takes photos of the original cabinet artwork and imports that into Corel Draw and gets the colours exactly right. The Corel Draw file is then sent off to have stencils made up.

Parts. Lots of them

“I sand down the whole cabinet and prime it in white (with the same speckled or webbed finish.) Then I use the correct paints which are pedantically colour matched so they are identical to the original with the stencil.”

In the meantime the metalwork that has been dismantled is sent to the chromers, and once that comes back the machine is reassembled and a new playfield glass is fitted. Details like apron cards aren’t overlooked. Original ones are doggedly tracked down, and when these can’t be found than reproduction ones are made up using card that has been left in black tea for a couple of hours to produce the right aging effect. 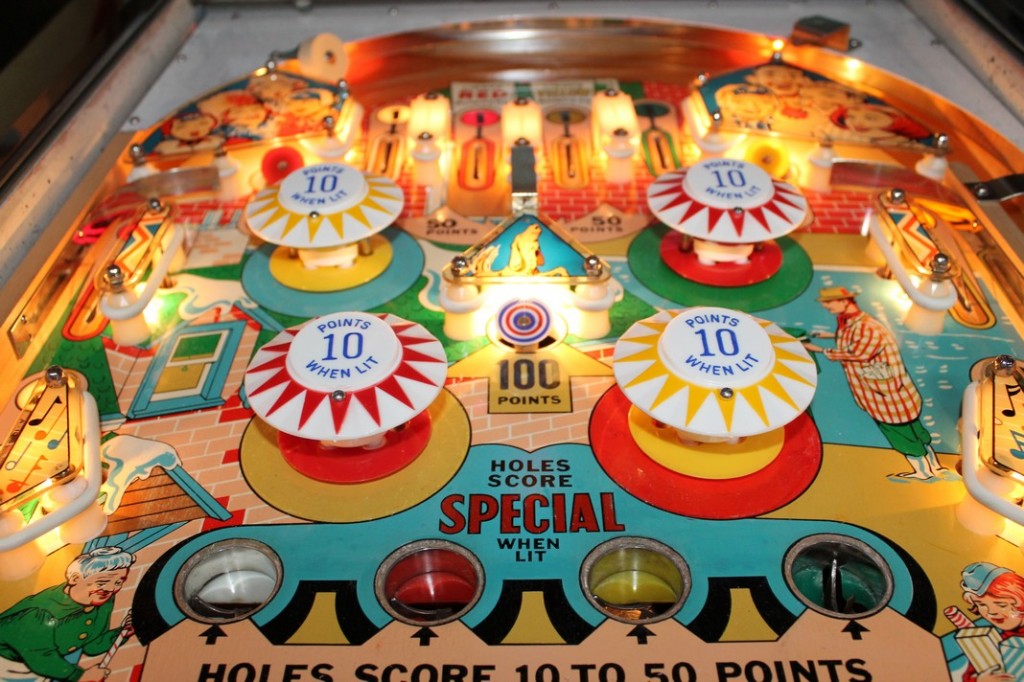 Malvermi believes that restored machines should be played, and should be fun to play, so beneath the playfield he converts the bumpers from AC to DC with bridge rectifiers. “That makes the bumpers so much more springy and zingy, so you get a game that was better than it was in 1967,” he says. “Of course if a buyer comes along and doesn’t like that then we can take off the bridge rectifier and put on the original coils. Every modification done here is reversible.”

There are plenty of rare or unusual games here like a 1963 Gottlieb  Square Head, and in the corner a magnificent 1963 Bally Star Jet with an immaculate playfield that Maurer has just taken three months to restore down to the minutest detail. 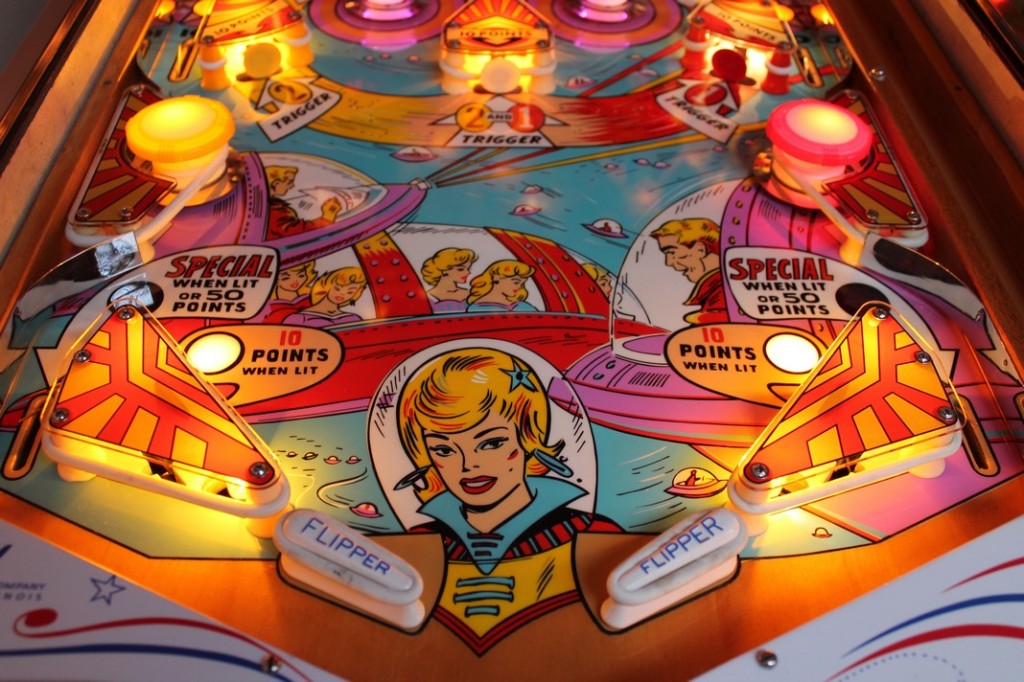 It’s 1963 and the colours are getting psychedelic. Nice earrings, Jet Girl.

On the other side of the room next to a dismantled 1977 Bally Bobby Orr Power Play are two Bally Mata Haris from 1977 – a “standard” solid state version, and a much rarer earlier EM version of which only 167 were made. 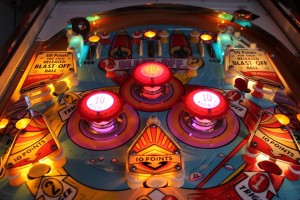 The Star Jet playfield was tricky to restore

It’s destined for Christie’s Out Of The Ordinary sale this summer with a reserve price of £12,000 ($20,000). (Malvermi sells most machines directly from his workshop, although one or two are also on sale at the Conran Shop in central London.)

“The guy in California who owned it wouldn’t sell it to me because I was British, so I had to beg someone in New Jersey to intervene and buy it,” says Malvermi. “Then I had to have it moved from California across country to New Jersey, and then shipped here. That would have been hard if I didn’t still have friends who worked in shipping.”

Malvermi got bitten by the pinball bug as a youngster in the 1960s. “I spent my entire youth playing pinball in the UK and Italy,” he says. Italy banned any gambling back then, so any form of reward like a replay or win a ball was forbidden.” 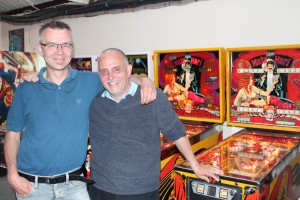 Maurer, Malvermi, Mata Hari, Mata Hari. One of these four will be auctioned at Christie’s

Fortunately for him Gottlieb decided to create versions of their machines specifically for the Italian market. They still had the add-a-ball feature, but unlike the American versions of the same games, this wasn’t advertised on the backglass. Although an open secret among pinball players, it was enough to keep the police happy, he says.

“You were also supposed to be 18 to play pinball, but I played all the time between the age of 11 and 15 and no-one ever stopped me.”

It’s this period of his life, and the machines he played at that time, that Malvermi wants to recreate in his workshop. “The idea here is to bring proper pinball back,” he concludes.