We are big fans of colour displays here at Pavlov Pinball: the Theatre of Magic at Pavlov Towers looked great with a ColorDMD unit – until we sold it. But not before we took out the ColorDMD, flashed a new rom file into it and stuck it in the Whitewater, where it looks almost as stunning.

There’s only one problem – they ain’t cheap.

The good news is there’ll shortly be an alternative to ColorDMD in the form the equally uninspiringly (but informatively) named LCD DMD. 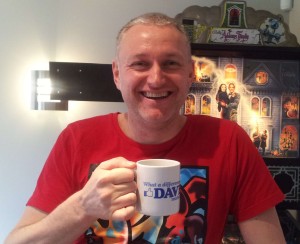 David Robinson – Dr Pinball – has degrees in Physics and Electronics

It comes from Dr Pinball – aka David Robinson. He’s the English chap who dreamed up the DMD Extender – a product that lets you connect a pinball machine to a Raspberry Pi computer so you can send the DMD content to an external screen or projector. He’s also the inventor of the Personal DMD – a 4.3 inch LCD screen that you mount in the score card area of a game’s apron that also mirrors the DMD. (That’s one in the top-most picture above.)

Both these products were works of creative genius but both had a similar flaw. By the admission of Robinson, most pinball fans weren’t very interested in them to the extent that they wanted to buy them.

Fortunately for Robinson the first of these products – the DMD Extender – falls into that category of inventions that are actually much better suited to a different task than the one that they were designed for. He soon realised that when combined with an LCD screen (and a Raspberry Pi and the right cables) a DMD Extender could be turned into a product that is very much in demand – a colour LCD screen that can be swapped in for a traditional DMD. Much like the ColorDMD. 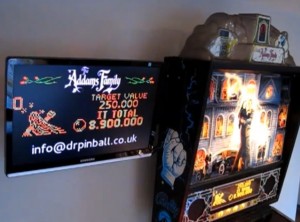 Nailed him! Cousin It takes a beating on a DMD Extender powered external screen

Having posted instructions on the Dr Pinball website showing the parts needed to build an LCD DMD using a DMD Extender and how to put it all together, Robinson found he was selling about five DMD Extenders a week. “People just wanted to buy them to do an LCD install,” says Robinson.

The obvious next step was to make the whole thing easier for potential buyers by finding sources for all the parts, putting them together and selling a ready-assembled product. And so the LCD DMD was conceived.

Sourcing the screens was no problem – Robinson buys the same LCD laptops screens as the ones used in the ColorDMD product from a local supplier in Manchester. 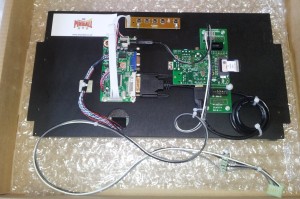 A much harder problem was where to get the controller boards and cables to connect these screens to a DMD extender via a Raspberry Pi. But as luck would have it, they were readily available on eBay. Bizarrely the seller expected them to be used by people who wanted to remove LCD screens from broken laptops and use them as standalone monitors – but they met Robinson’s needs perfectly.

“Then I just cut some plywood, painted it black, and mounted the boards on the back and the screens on the front,” Robinson says.

The finished product will be available to buy in a couple of weeks, priced at about £180 ($300) plus delivery. That’s a great deal cheaper than a ColorDMD costs in Europe. 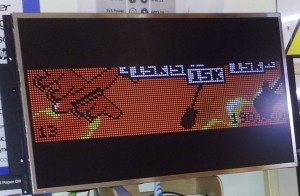 It looks good from the front

There are some important differences though: each frame that’s displayed on a ColorDMD has been hand coloured for supported games, while with the LCD DMD the colouring is done automatically.

How? Each of the 4 shades or orange (or whatever) that a DMD typically displays – 0%, 75%, 90% or 100% brightness – are translated into four colours  that you can select from a gamut of millions of different shades using the configuration software.

“You have to be careful with the colours you select or that can end up looking really weird,” Robinson warns.

So the results are probably not going to be as impressive as with a ColorDMD with hand-selected colours for each frame, but then you get what you pay for. 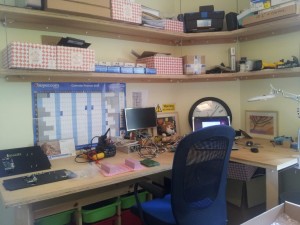 Dr Pinball’s surgery where the LCD DMDs are assembled

To develop the software Robinson had to become something of an expert in DMD signals. In an act of supreme boffinry in the finest tradition, he worked out how to take the signals coming down a DMD cable from different machines and figure out what they meant.

What’s interesting about that is the fact that different manufacturers came up with such different solutions.

“Stern do it in a really good way,” Robinson says. “When you look at Gottlieb’s solution, you have to ask why on earth they did it like that. Sometimes nine times as much data is being sent to do the same thing.”